IAPs make up 40% of revenue on iPhone free releases

May 18th, 2011 - 08:43pm
By Keith Andrew
The first fruits of a new data sharing partnership, Distimo and market research firm Newzoo have published a report that adds weight to the App Store's status as the most lucrative marketplace for games.

The report published by the two firms unsurprisingly concludes that games are the most popular brand of apps on iOS, accounting for both half of all paid and free titles.

More interestingly, however, the report deduces that the monthly average download rate across the US and the six major European territories is 2.5 per user.

Based on stats taken in March, Distimo and Newzoo claim that a total of 63 million users download 5 million games a day. 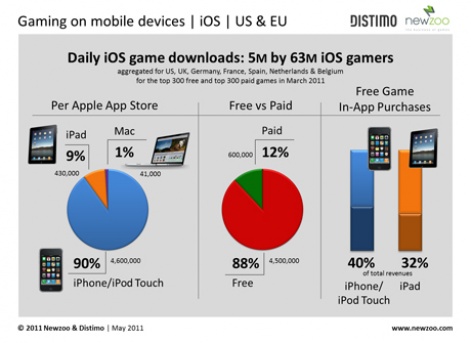 The two parties estimates that between six and seven percent of the online population  in the US, UK, France and Germany own an iPhone, while in Spain, Netherlands and Belgium it's three to four percent.

The share of iPhone owners who play games comes in between 50 and 75 percent.

"Offering gamers the opportunity to spend money in-game is becoming a must-have feature for game developers," the report states.

"While some 88 percent of downloaded top 300 iOS games are now offered for free, in-game purchases - within both free and paid games - generated approximately two-fifth of total revenues."

In total, in-game spending on free games grosses 40 percent of total revenues on iPhone and iPod touch games, and 32 percent on iPad releases.