But Apple will remain king for some time to come

June 2nd, 2011 - 12:02pm
By Keith Andrew
As dramatic as shedding almost a third of its share in two years might sound, the latest report by research2guidance makes no suggestion that the App Store has made any major missteps.

Rather, Apple's weaker hand is largely to do with the general rise in the number of competitors it now faces.

In fact, if the company can curb its slide in the coming couple of years, the German firm believes the App Store will remain untouchable for some time to come.

Research2guidance claims the launch of the App Store in 2008 into a sparse market  third-party app stores such as GetJar and Handango aside  saw Apple snap up an 81 percent share, based on the number of free and paid downloads an app store generates per period.

However, the launch of major rivals in the intervening years - Android Market the most notable competitor  has resulted in Apple's share falling to 59 percent by the end of Q1 2011 had fallen, representing a drop of 22 percent. 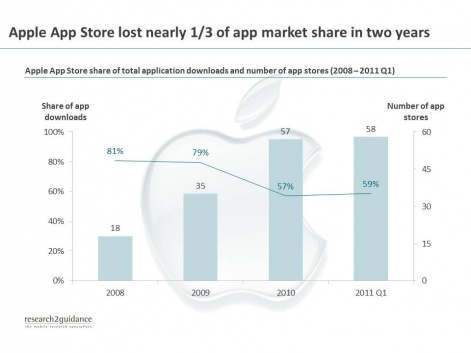 Nonetheless, that actually represents a slight rise from the 57 percent share the App Store held in 2010, and research2guidance's Ralf-Gordon Jahns thinks such stability could be telling for Apple's rivals.

"If Apple manages to slow down its market share loss over the next two years it will be difficult for other players to overtake Apple for a long time," said Jahns.

"One of the reasons for this recent development is the download support the Apple platform gets from iPad users. iPad users belong to the 'heavy downloader' user segment.

"This support will remain as long as the other app store operators fail to come up with a competitive app store offering which addresses the tablet app users, and non-iOS based tablet shipment numbers are low."

Jahns believes the App Store's market share may fall to 40 percent in the years to come, but the prevelance of 'heavy downloaders' on the marketplace will help keep it ahead of the pack.

Market shifting towards niche app stores as number doubles to 50 in 2011, reckons research2guidance

Should you be making weather apps? Report says, on average, they make four times more than games on Android

Unstructured data suggests the average number of downloads per app on Ovi Store is 2.5 times more than an app on App Store

Smartphone app market hits $2.2 billion in first half of 2010