Android's US share triples in last 12 months as BlackBerry, Windows Phone and webOS fall back

July 7th, 2011 - 11:20am
By Keith Andrew
A summary of comScore's analysis of the smartphone market in the US during the last 12 months both starts and ends with the rise of Android.

The company's latest figures for May 2011, drawn from its MobiLens service, have Google's OS jumping by more than 5 percent from February to a 38.1 percent share.

But it's only when Android's hand is compared year on year that the extent of its recent surge becomes clear.

One up, three down

Back in May 2010, Android was the fourth largest smartphone OS in the country, with a 13 percent share of the market.

That means Google's share has almost tripled during the last 12 months  a rise that has coincided with the decline of three of its rival's: RIM, Microsoft and Palm. 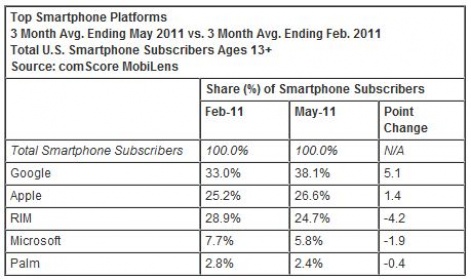 All three platforms  BlackBerry, Windows Mobile/Windows Phone and webOS - have seen their share fall back across the same period, but it's RIM that has lost the most ground, dropping from a 41.7 percent share in May 2010 to 24.7 percent in the current study.

No change at the top

Things are comparatively stagnant when it comes to OEMs.

On this score, RIM's share hasn't actually moved an inch  holding firm on 8.1 percent  though the company has fallen back to fifth place following the rise of Apple, which enjoys an 8.7 percent share of the handset market. 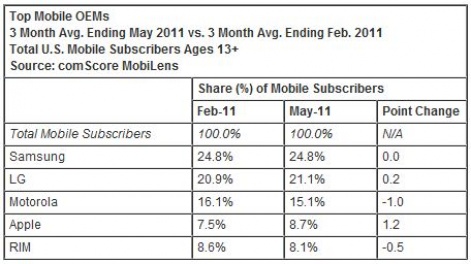