Hitting eReader and laptop sales however

July 12th, 2011 - 06:18pm
By Keith Andrew
As a new hardware sector, it was assumed tablets would only thrive by stealing unit sales from other sectors.

Almost every market  from PC, to console, to eReader  has been cited as a possible target since, though the latest numbers released by Resolve Market Research suggest the tablet's impact on more traditional gaming mediums is shrinking.

According to the results of its annual consumer survey, only 14 percent of gamers plan to buy a tablet instead of a console in 2011, down from last year's figure of 27 percent.

Handhelds are also beginning to regain their status.

Just 26 percent of those surveyed said they're more likely to buy a tablet instead of a portable gaming device this year, down from 38 percent in 2010. 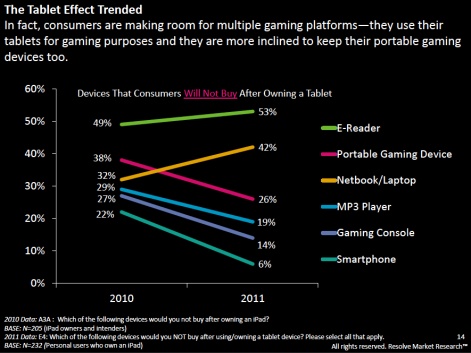 Instead, Resolve believes eReaders and laptops are currently taking the strain, with 53 percent of consumers with a tablet saying they wouldn't buy a tablet to access digital books and 42 percent not planning to buy a laptop. Indeed, 57 percent of business users say their tablet has partially replaced their laptop.

That's an impact that could well be nullified, however, by the likes of Barnes & Noble's app-equipped Nook Color and the heavily rumoured Amazon tablet, expected before the end of the year, not forgetting the success of its Kindle eReader.

Of course, when it comes to the battle between the tablets themselves, the original iPad still leads the way with 90 percent awareness.

For reasons unknown, its successor only has 83 percent awareness, though it's comfortably ahead of the bulk of the competition.

Following in their wake come Samsung's Galaxy Tab on 46 percent awareness, and Motorola's Xoom on 44 percent.

Interestingly, a third of tablets owners have two devices, with 46 percent of single unit owners expecting to purchase another device in the next six months.

You can pre-order the full report here.