Virtual currency behind the rise

July 27th, 2011 - 01:20pm
By Keith Andrew
Increasingly, the debate had by most mobile developers is not which platform to support, but rather just what monetisation model to adopt when they inevitably opt for the App Store.

Earlier in the week, Flurry reported the average IAP transaction now comes in at $14, suggesting developers of freemium releases are, in theory, making more money than some give them credit for.

Distimo's suggestion that the revenue generated by top freemium titles on Apple's platform has jumped tenfold since June 2010 adds to this commentary, coming just as the average selling price of the most popular paid games has begun to fall.

The best things in life are freemium

The combination of the two factors means an industry with an increasingly prominent freemium market is likely.

In fact, numbers for June 2011 suggest more money is made from freemium releases within the top 200 grossing games on the marketplace than from paid titles  a significant change from this time last year.

"As of June 2011, 52 percent of all the revenue of top grossing games is generated by freemium games," said Distimo of the results.

"This implies that the revenue generated by top freemium games increased more than tenfold in this period, given the fact the total revenue of top 200 grossing games increased 79 percent in one year."

Distimo claims the main reason behind this surge is the increasing prevalence of virtual currencies.

"During the first six months of 2011, the proportion of the 300 most popular free games that used virtual currencies increased from 24 percent to 35 percent," Distimo added.

"An obvious example here is the highest grossing game in June, Tap Pet Hotel. This game is monetised just by its virtual currencies 'treats' and 'coins'."

Monetisation matters aside, however, it's hard to find all too much bad news in Distimo's numbers. 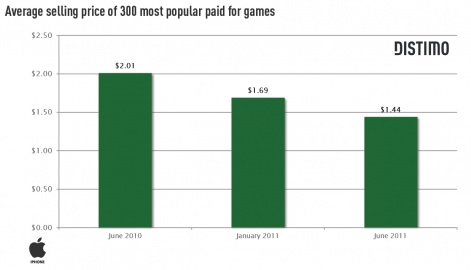 On all major markets bar BlackBerry's App World, games are the most popular category, while in prominent marketplaces like the App Store for both iPhone and iPad and GetJar, games are growing at a faster rate than all other apps combined. 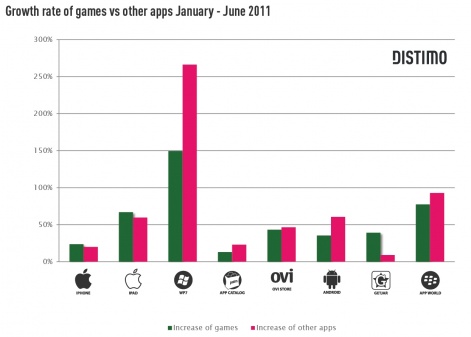