Android the dominant force in US, but 36% of states opt for iOS

Mapping the US of OS

August 8th, 2011 - 11:10am
By Keith Andrew
Monthly sweeps of smartphone market share in the US are nothing new, but detailed looks into the inherent bias some areas of the country have towards particular platforms aren't commonplace.

Jumptap's assessment of the US market, however, details a decipherable split between the west coast, where Android is the major play, and states in the midwest and north east, where iOS has a hold over most consumers.

The split, sourced from the ad network's audience data and detailed in its STAT report for July, shows that 18 states  or 36 percent  have iOS as the dominant platform, despite the fact that nationally, Android holds 38 percent of the market to iOS's 33 percent. 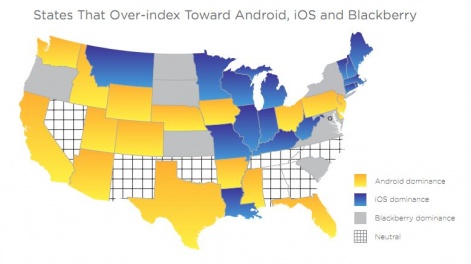 In comparison, Android has the advantage in 16 states (32 percent), while BlackBerry remains top dog in eight states (16 percent), with a national share of 22 percent.

While the network offers no theories as to why the split exists, it does claim the fact it's monitoring geographical differences is proving useful to the industry at large.

"Our advertisers are requesting the most granular data available on mobile users so they can create the most targeted campaigns," said CMO Paran Johar.

"This new data reveals some interesting patterns for advertisers to consider when targeting consumers using Android devices vs. iOS devices."