But Windows Phone to remain relevant

August 15th, 2011 - 10:10am
By Keith Andrew
Microsoft's tactic of pitching the roll out of Mango as a major trigger for Windows Phone appears to be working, with numbers sourced from GetJar suggesting developers hold it in the same high regard.

A sweep of 300 studios for the app store's latest developer survey claims interest in Microsoft's OS is growing steadily.

In contrast, confidence in players like BlackBerry, which already enjoys a far stronger base than Microsoft OS, is falling away.

It's Google's platform that, overall, is beginning to take charge of the development community, however.

As detailed on the GetJar blog, developers believes work on Android  both in terms of smartphone output, and titles for tablets  will increase over the next six months.

47 percent of studios believe they'll be working on Android tablets in half a year's time, for instance, even though just over 20 percent of them are developing for them now.

"So it seems that developers are really looking at Android tablets as the next possible area of opportunity," adds GetJar CMO Patrick Mork, who will soon be leaving his post to move to Google as marketing director for mobile apps.

"Another note of interest as well was the growing interest in Windows Mobile. Mango seems to be tickling developers pink with 24 percent of developers saying theyll develop for OS compared to less then 9 percent today."

Staying off the bottom

Indeed, what will cheer Microsoft is the assessment by 70 percent of developers that Windows Phone will still be a viable platform in five years time, behind Android and iOS on 98 percent each.

That's an important vote of confidence in Microsoft's platform as it looks to distance itself from fellow bit-part player webOS and former giant BlackBerry. 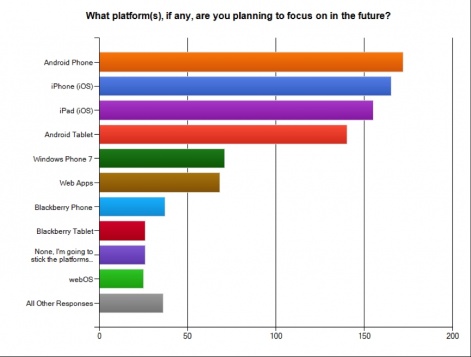 "Blackberry still faces some challenges with less then 15 percent of developers interested in developing for the platform the next six months," details Mork

"Less then 50 percent of developers believe RIM's platform will survive the next 5 years."

Mork claims Symbian is in an even worse position, with less than 7 percent of studios looking to develop on the platform during the next since months.

In all, only 20 percent believe it will still be around in any meaningful sense in the next couple of years.