Firm takes #2 spot on own ecosystem

August 15th, 2011 - 07:14pm
By Keith Andrew
From nowhere to the second most prolific Android manufacturer in North America, analysts might still be scratching their heads as to the motivation behind Google's $12.5 billion swoop for Motorola, but it has some obvious - and immediate - benefits.

Analytics firm Localytics claims Motorola current holds a 29 percent share of the Android ecosystem in the US and Canada.

Though that's not the market leading position the firm found itself in back in 2009 - the firm tracking behind leader HTC on 35 percent - it still puts it ahead of coming force Samsung on 25 percent.

In response, commentators will argue that's a situation that won't hold for long.

Samsung is enjoying particular success with the Android powered Galaxy S II, which has hit sales of 5.5 million units before even launching in the US.

However, as things stand, Google has become a major player in its own backyard, almost overnight. 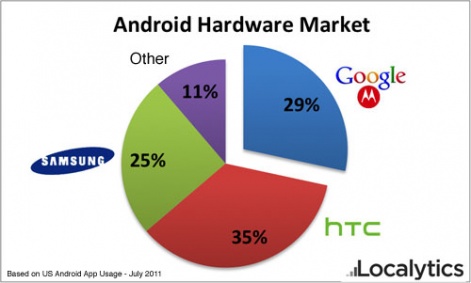 "While much of the conversation surrounding Motorola/Google has centred on Motorola's impressive collection of patents, the smartphone market share implications are tremendous," reports Localytics.

What analysts will be looking for now, however, is just what Google does with its newfound purchase  Motorola handsets likely to be the first to receive new versions of the OS  and, even more importantly, how existing OEMs react.

Crucially, both HTC and Samsung successfully operate outside of the Android ecosystem on Windows Phone 7.

Though Microsoft and Nokia signed a strategic alliance that will cement the Finnish manufacturer as the premier OEM on the OS, both parties stopped short of a full on merger.