August 16th, 2011 - 06:10pm
By Keith Andrew
Having established that freemium games make a lot of money  65 percent of the revenue in the top 100 games, in fact  Flurry has since turned its attention to just what those dollars are being spent on.

It's an interesting measure for developers, if only because it offers an insight into the kind of in-app purchases that prove the most popular with consumers.

Surprisingly, it's not permanent upgrades or additional levels  the so called 'durable purchases'  that are the most popular, either. Instead, players prefer short-term bonuses, such as depletable grenades or fertiliser for their fictional farms.

"Over two-thirds of all items purchased in iOS and Android freemium games are consumable, goods that users deplete," reports Flurry's Jeferson Valadares on the firm's blog.

"Measured another way, approximately half of all real dollars spent within all apps are for game items consumers dont keep. Based on our data, the most popular virtual purchase, consumable or otherwise, is for 'premium' in-game currency." 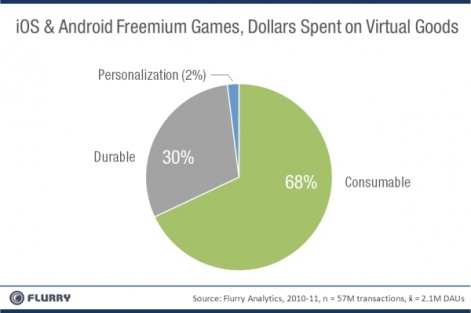 Based on Flurry's findings  which are sourced from more than 57 million purchase transactions during the last year  consumers are more likely to buy purchases that speed their progression through the game, rather than add anything substantial to it.

"Games that are designed with consumable items in mind tend to monetize very well. For developers, this offers the best ROI on game development resources," adds Valadares.

Flurry does note, however, that durable items aren't without merit.

Though they make up a smaller share than consumable goods, they do build user engagement, making players feel like they're invested in play as it progresses.

The smallest category are personalisation items  decorative upgrades that offer nothing in terms of gameplay.

"Also, consumers dont tend to decorate, and then re-decorate, in most games. The rule should be that if a game is not largely about personalisation, then add just enough of these items to allow players to create their own unique gameplay look and feel."

In total, Flurry estimates that total iOS and Android game revenue will surpass $1 billion in 2011.