Launching with such a low RRP, however, isn't without its costs to the online retail giant.

According to figures estimated by research firm IHS iSuppli, despite comparatively low costs when compared to other tablets, Amazon will lose almost $11 on every tablet sold, and that's before taking into account additional costs such as original design, distribution and marketing.

IHS iSuppli claims the bulk of the cost of Amazon Fire - $192 of it  is swept up by hardware components.

Obviously, it hard to tell how accurate this bill of sale is, with exact cost depending on variables such as production volumes and industry competition for components - plus the fact the hardware is actually released yet. 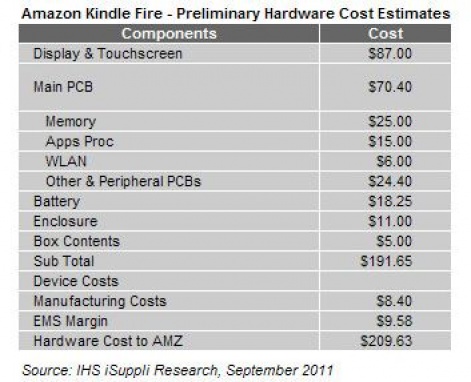 The argument behind this is that with iPad ruling tablets sales, competitors have to be as cheap as possible; Amazon using price as a leverage to gain online shoppers that it can monetise through its traditional online store operations.

"Similar to Walmart and other large brick-and-motor retailers, Amazon's content business is designed to lure in consumers to buy such everyday goods as well as other money-making items," concludes the firm.

"The importance of this strategy cannot be underestimated. So far, no retailer has managed to create an umbilical link between digital content and a more conventional retail environment.

"With Kindle, Amazon has created the most convincing attempt at this yet, and it is doing so by using established retail tactics: deploying content to get shoppers in the door, and then selling them all sorts of other goods.

"With its lower pricing than the iPad, and its positioning as a super eReader, the Kindle Fire may serve in fact to expand the tablet market beyond current expectations," the firm concludes.

"As such, the Kindle Fire potentially could become the No. 2 selling tablet after the iPad."