October 6th, 2011 - 02:23pm
By Keith Andrew
Considering this time last year that RIM and Microsoft combined controlled almost half the smartphone market in the US, news the two firm's share has fallen by around a half in itself is important, if not entirely surprising.

Microsoft, of course, will point to the launch of Windows Phone during that period - its share decline an inevitability.

Prior to this, Windows Mobile's share was falling through the floor in anticipation of the firm's new platform, and its 10.8 percent share of smartphone subscribers was never likely to hold.

One year later, and Windows Mobile's successor holds 5.7 percent of the market - though it's worth nothing that's equal to the share Windows Phone amassed in July, suggesting Microsoft has been able to stop the rot and growth may follow.

It's far harder to mount a defence for BlackBerry.

In August 2010, RIM's platform was the most popular smartphone OS by some distance, mopping up 37.6 percent of the market.

That's a share that's since fallen by almost 18 percentage points since, slipping to 19.7 percent in August 2011.

The launch of BlackBerry 6 in the intervening months has had no discernible impact on RIM's decline, though the firm will be hoping the first BlackBerry 7 handsets, which rolled out this August, fare better. 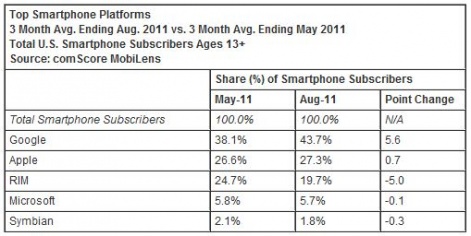 Elsewhere, both Android and iOS continue their steady growth  the former expanding rather more quickly than the latter, while Symbian's share has now dropped below 2 percent.

When it comes to manufacturers, the market appears far more static.

Samsung is the dominant player, with 25.3 percent of the market - down from July's 25.5 percent share, but up year on year by 1.7 percentage points. 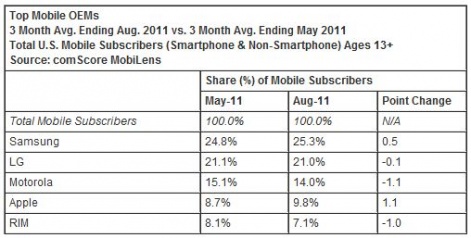 Its nearest challenger, LG, lacks the momentum to take its Korean rival on  its 21 percent share is down 0.2 percent year on year, but up 0.1 percent from July's tally.

Motorola's long term decline, meanwhile, appears to be stabilising, with August's 14 percent share only 0.1 percentage points down on July's.