October 18th, 2011 - 01:59pm
By Matt Sakuraoka-Gilman
Even the most vocal of Android supporters would have to admit one area Apple has Google beat is in the roll out of firmware updates.

Indeed, following the news 25 million users had updated to iOS 5 within its first five days, app analytics specialist Localytics has suggested around a third of the platform's userbase have already made the leap.

Working from Apple's figures, the firm estimates 33 percent of all eligible devices now run iOS 5, with 2 percent of that figure accounted for by sales of the new iPhone 4S.

Predictably, iPad 2 and iPhone 4 come out on top when it comes to individual device download numbers.

36 percent of iPad 2s now run the latest update, while 35 percent of iPhone 4 owners have also upgraded their handsets. 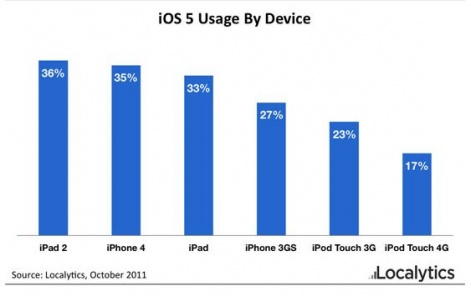 Of the other eligible devices, 33 percent of original iPads owners and 27 percent of those with an iPhone 3GS in their pocket have downloaded the update.

When it comes to the iPod touch, 23 percent of users with a third generation device now run iOS 5, while 17 percent of those with the latest edition have also made the leap.

In comparison it took Google's Android 2.3 almost a year to reach four out of every ten handsets while Windows Phone Mango managed to hit 30 percent of devices within two weeks.