Android holds 45% share of US smartphone market, while BlackBerry's down 18% yoy

November 7th, 2011 - 01:16pm
By Keith Andrew
The fear for the rivals when Google announced its intention to acquire Motorola was that the manufacturer would become Android's best friend.

Motorola, it was speculated, would launch devices packed with the kind of features that stemmed from early exposure to the platform's updates.

Yet, as the months pass, so - in the US at least - Motorola continues to slide into obscurity.

During the course of the past year, the firm has shed a quarter of its smartphone market share according to comScore, dropping from 18.4 percent in September 2010 to 13.8 percent now.

In contrast, market leader Samsung  the firm behind Google's forthcoming Galaxy Nexus  has cemented its position at the top of the table, growing to capture a quarter of the entire smartphone market.

Sat between the two, LG remains roughly in the same position it was 12 months ago, with a 20.6 percent share  down half a percentage point in all.

Even with Motorola's slide taken into account, Android continues to dominate the smartphone scene in the US.

Figures for September hand Google's OS a 44.8 percent share of the market  more than double the 21.4 percent share the platform held during the same period last year. 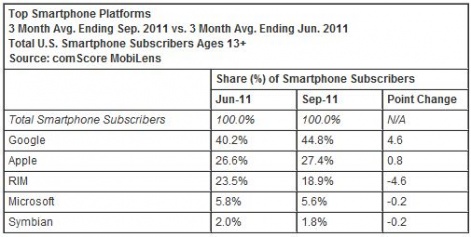 Google's growth has come at the expense of BlackBerry.

RIM's platform accounts for 18.9 percent of the market, placing it in third spot. This time last year, however, BlackBerry was still top dog, with a 37.3 percent share of the market.

That means RIM has fallen back 18.4 percentage points during the last 12 months.