November 14th, 2011 - 05:35pm
By Matt Sakuraoka-Gilman
Predictions Amazon's upcoming Kindle Fire tablet will be a hit with bargain hunting consumers won't be too wide of the mark if developers get their way.

Stats released by cross-platform development specialist Appcelerator suggest enthusiasm for the device within the development community is currently ramping up.

Said figure also mean developers are doubly as interested in Kindle Fire as they are Amazon's biggest rival in the high-end eReader market  Barnes & Noble's Nook Color, which garnered 24 percent of support across the region.

Appcelerator noted the level of developer interest in Kindle Fire is now on a par with the enthusiasm studios showed for iPad before its release, with interest coming in at 53 percent in April 2010.

Despite Galaxy Tab falling short against its new found rival in North America, however, Appcelerator claims on a worldwide basis, Samsung's tablet is still top dog within the Android ecosystem.

Globally, 56 percent of developers intend to support Galaxy Tab, ahead of Kindle Fire on 43 percent. 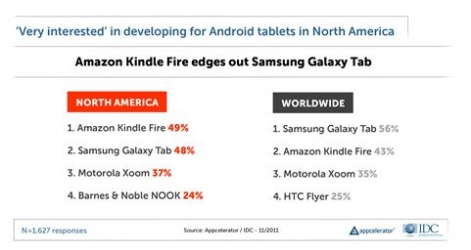 Developers turned on by Kindle Fire cite the device's $199 entry price as the main reason for their interest, with the strength of the device's potential software library its second biggest strength.

On the mobile side, Windows Phone also seems to be gaining momentum, with 38 percent claiming they're now 'very interested' in supporting Microsoft's platform.

The main reason appears to be the launch of Nokia's Lumia 800, with the Finnish firm's partnership with Microsoft acting as a trigger. 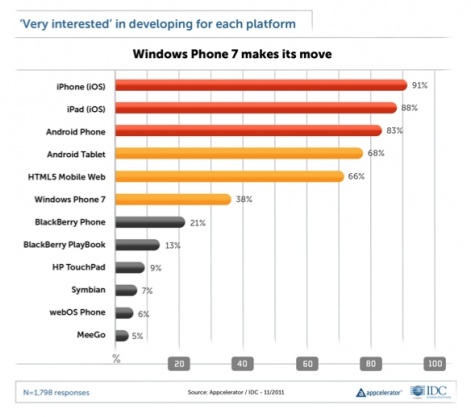 While Windows Phone is winning the industry over, however, RIM is losing ground.