November 22nd, 2011 - 04:57pm
By Matt Sakuraoka-Gilman
So many market share reports detail Android's continued ascent that one suggesting the platform has suffered a slight dip tends to stand out.

That's exactly the findings drawn from ad network Jumptap's monthly MobileSTAT report covering the month of October, with the firm reporting around a 3 percent slump in Android's global share to 44.7 percent.

The reason? Quite simply, the launch of iPhone 4S gave Apple a fairly hefty spike across the course of the month. 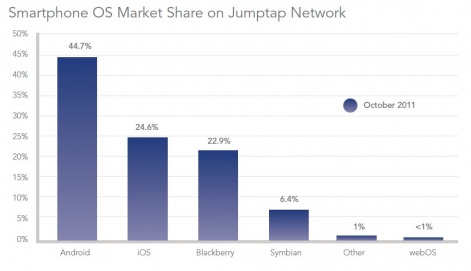 Indeed, iOS market share jumped to 24.6 percent in the latest report, with BlackBerry holding third spot on just under 23 percent.

To adopt or not adopt?

Aside from new hardware, however, one of the other major developments throughout the course of the money was the launch of several OS updates, including iOS 5, Android 4.0 and BBX OS.

Jumptap's figures, however, suggest not all were adopted in equal measure.

It took iOS 5, for instance, 15 days to account for 32 percent of traffic. In comparison, Android version 2.3 took 10 months - until December 2010 - to achieve the same level of penetration.

Jumptap claims this is an indication of how little control Google has over its end user customers in comparison to Apple's vertically integrated ecosystem.

"With lukewarm statements of upgrade support coming from OEMs, it is highly unlikely that we will see widespread adoption of Android 4.0 in 2012," the firm added.

On the hardware front, Jumptap claims it's something of a more even contest between the two leading platforms.

Samsung devices also register 37 percent more requests on the Jumptap network than iPhone, though iPhone users are twice as active on their devices than Samsung users.

"Gaming is the top content channel on Samsung smartphones, which is likely tied to the higher app usage we see and suggests a younger audience," states Jumptap.

"For iPhones, News and Entertainment is the top channel, which may explain the prevalence of web browsing and suggests an older audience.

"The growth of the iPhone 4S suggests that owners of older iPhones - 3G and 3GS - are upgrading, while iPhone 4 owners are waiting for the next release."