November 23rd, 2011 - 12:51pm
By Keith Andrew
One year on from the reboot of Microsoft's mobile OS, and Distimo's monthly app report comes with a distinctly Windows Phone flavour, offering up a summary of the platform's first 12 months on the market.

The summary details a recent swell in both the number of apps available and the downloads they're clocking up.

Distimo's report notes Microsoft's marketplace got off to a particularly slow start, but began to pick up in February, when free apps in particular began to rule the roost.

That's ahead of the 1,300 new paid titles hitting the platform during the same period. 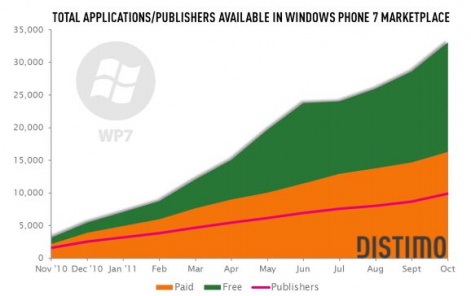 When it comes to both free and paid releases, games are naturally the most popular category, making up 33 percent and 55 percent of all those on offer respectively.

Free apps, however, generate far more downloads. In the US, Distimo claims the top 300 free and paid title on the platform are amassing 121,000 downloads a day, or over 3.6 million a month. 83 percent of those downloads are for free releases.

"Compared to the Apple App Store, these numbers are relatively small," comments Distimo.

Just how long that disparity will exist, however, is largely dependent on how quickly Microsoft - and OEMs such as Nokia - can grow Windows Phone's userbase.

But it's gaining developer support. At the moment, Distimo claims the platform is attracting 700 new publishers a month, which has resulted in "continuous" growth for the marketplace.