December 15th, 2011 - 05:20pm
By Keith Andrew
Time was when Android advocates could tell themselves iOS attracted more developers because of its larger userbase.

Now, with all measures favouring Google's platform, Flurry has turned its attention to the reasons why Apple is still able to curry more favour.

Indeed, the latest numbers published by the firm suggest new project starts on iOS in the run up to Christmas outnumber those on Android by 3:1  not as high a rate as in previous years, Flurry claims, but nonetheless notable given the declaration made by Google chairman Eric Schmidt at the Le Web conference that "Android is ahead of the iPhone now".

Despite Google's leadership claim, however, Flurry's numbers suggest the platform failed to gain any ground on iOS in terms of developer support in 2011. In fact, its share actually shrunk. 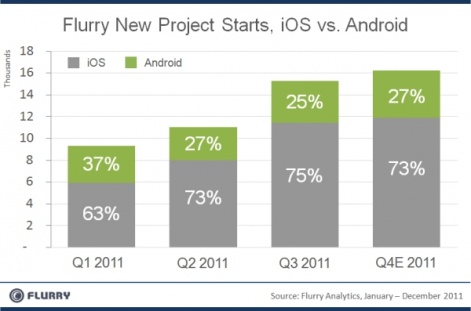 "Over the year, developer support for Android has declined from more than one-third of all new projects, at the beginning of the year, down to roughly one-quarter by the end," says Flurry's Peter Farago on the firm's blog.

"While the market nearly doubled for both platforms, we believe key events changed the proportion of support between these two platforms."

Apple, Farago claims, was boosted by expanded distribution thanks deals with Verizon and Sprint to carry iPhone, while the launches of iPad 2 and iPhone 4S further cemented iOS in the minds of consumers.

In comparison, Android "does not enjoy a truly recognisable flagship device among its army of OEMs supporting the platform."

So, if even what's becoming a vastly larger userbase can't swing developer support in Android's favour, why exactly is iOS still king? Farago claims it comes down to a belief that there's more money to be made on Apple's platform.

"Anecdotally, developers consistently tell us that they make more money on iOS, about three to four times as much," Farago continues.

"To be sure, we pulled a sample of in-app purchase data from a set of top apps with versions on both iOS and Android, comprising of several million daily active users (DAUs). Running the numbers, we find that, on average, for every $1.00 generated on iOS, the same app will generate $0.24 on Android." 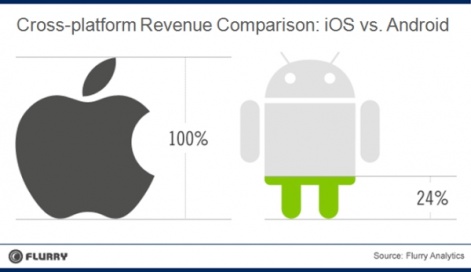 The suggestion isn't, however, that iOS owners are just more eager to download apps. Rather, Apple just makes it simpler to do so.

"Upon setting up an iOS device, a consumer must associate either a credit or gift card to her iTunes account," Farago concludes.

"In theory, this means that 100 percent of all iOS device users are payment enabled. This has not been the case for Android, resulting in lower revenue generation possibilities on the platform.

"While exact Google Checkout penetration is unknown, the respective revenue generated by each platform for same apps, provides the morale of the story: Despite installed base numbers and daily activations, the almighty dollar still drives business decision making among application developers."