44% of users only spend on IAPs after they've played a game 10 times, reports Localytics

January 18th, 2012 - 12:39pm
By Keith Andrew
Studies may point to an industry soon dominated by games equipped with in-app purchases (IAP), but that doesn't mean developers are totally clued up why the model works.

In reply, the latest report by Localytics looks to dispel many of the misconceptions that surround the practice  namely the idea that developers need to coerce users into making their first purchase as soon as possible.

The value of user retention

According to Localytics' numbers, of users that have made IAPs, 44 percent didn't do so until they'd started the app in question 10 times or more.

Furthermore, the report concludes users who part with their cash during play will most likely do so 12 days after first launching the app. 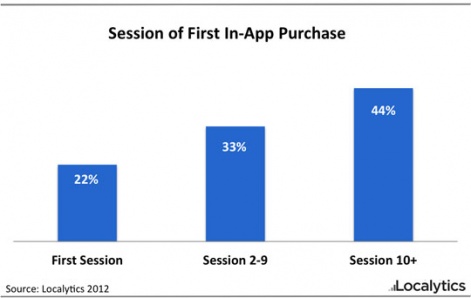 It's a state of play Localytics believes is causing publishers and developers alike to move away from incentivised downloads and, instead, work on embedding users into their titles by choice, increasing their overall customer lifetime value (CLV).

"While moving users towards a purchase as quickly as possible is often considered the primary objective, this data suggests that turning purchasers into loyal, repeat users should be a top priority," Localytics adds on its blog.

"With a high correlation between highly engaged users and in-app purchases, developers and publishers with a goal of maximising CLV have even more reason to obsess over user retention."

Good things come to those who wait

Just as important as all such data, however, is Localytics' assertion that the users who hold out their purchases until they've started an app multiple times are then more likely to become one of the title's biggest spenders.

"First session purchasers will make an average of 2.8 purchases in a given app during their user lifetime, compared with 3.5 purchases for all other purchasers," adds the firm, with said users making 25 percent more IAPs over their lifetime.

"While a first-session purchase is an excellent result, our data found that only 16 percent of users who make a purchase their first app session will go on to engage with that app 10 or more times, compared with 26 percent of overall app users." 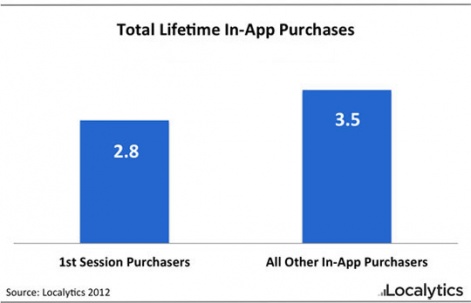 Generating such loyalty is, of course, no easy task.

Indeed, Localytics concludes that, throughout the course of 2011, 26 percent of apps downloaded were used only once before being deleted.

Localytics findings can be browsed in full on the firm's blog.