More than a third of Neon Play's 30 million downloads made at the weekend, reveals CEO Oli Christie

Accounts for almost 39% of all profit

January 18th, 2012 - 05:17pm
By Keith Andrew
The app business, like any other, relies on being able to predict how and when consumers are likely to act.

Hence, any data that points towards a reliable trend is invaluable.

In the case of UK outfit Neon Play, the studio's assertion that most downloads take place at the weekend is logical enough, but the picture the firm paints of a Monday to Thursday lull is an important distinction for those looking to make the most out of mobile marketplaces.

Can't wait for the weekend

According to numbers sourced from the studio's total of almost 30 million downloads to-date, Neon Play CEO Oli Christie told PG.biz via email that Saturday is the outfit's most profitable day of the week. 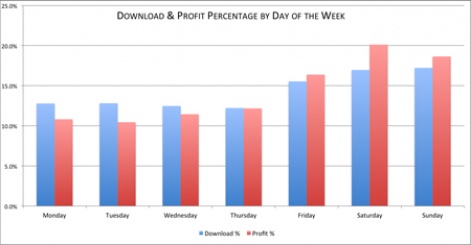 Christie claims much of this rise is due to players interacting with the games through in-app purchases and ad impressions  user sessions peak on Saturday  while Sundays also benefit from hosting the most app installs.

In comparison, much of the rest of the week is about treading water.

"Mondays and Tuesdays are poor and it appears that our users wait until the weekend is at least within sight before they start looking for distractions," added Christie.

"It may not be totally surprising, but I think it's interesting to see the revenue increase on a Weds and Thursday and then over-index on Fridays and the weekend - and the fact that Saturdays are better than Sundays."

Neon Play's numbers mirror stats published by Distimo in December that suggested 33 percent of all downloads of the top 300 most popular free apps take place at the weekend  a trend the firm suggested highlighted how important pushing titles at the weekend can be to their long term success.