February 3rd, 2012 - 02:20am
By Keith Andrew
The last time a Jumptap report graced the pages of PG.biz, all eyes were on how the launch of iPhone 4S had enabled iOS to eat into Android's hold over the smartphone market.

Fast forward to January, and it now appears Google's pre-Christmas share slip was nothing more than a temporary dip, with Android ending 2011 with 59 percent global share on Jumptap's network, well ahead of iOS on 22 percent. 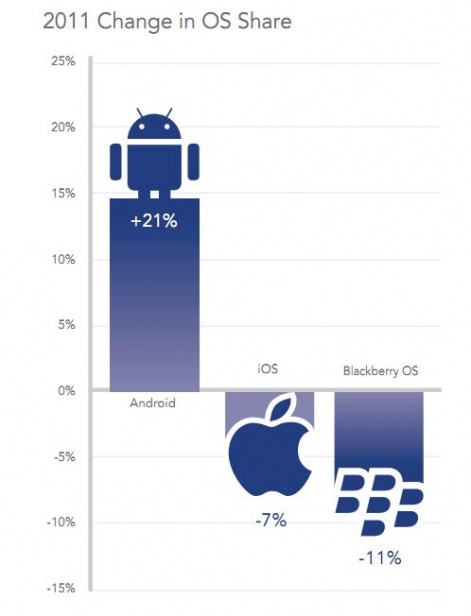 "While iOS lost the battle of share, it wasn't due to lack of growth," points out Jumptap in its MobileSTAT report.

"iOS tripled in overall traffic on the Jumptap network, while Android more than quadrupled. Most advertisers are now recognising the importance of both, and advertising cross-platform."

The situation for RIM is dire, however. Jumptap claims BlackBerry "continues to slide out of the picture", with its share falling by 11 percentage points throughout the course of 2011.

Further good news for Android comes in the form of Kindle Fire's performance over Christmas.

Jumptap reports Amazon's debut tablet stole the limelight during the festive season, with traffic from the tablet rising from 10 percent at the beginning of December to 30 percent by new year. 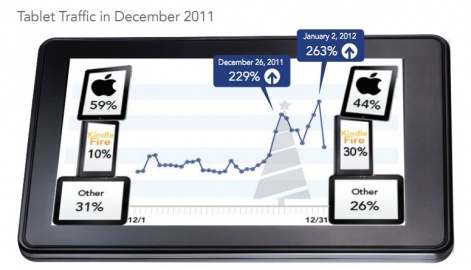 As a result, iPad's share of traffic fell by 15 percentage points over the same period, ending 2011 with a 44 percent share.

Apple's iOS continues to lead the way in terms of click-through rates (CTRs), however, with Jumptap citing an increase in ad interaction with every major update to the platform.

Case in point: iOS 3 boasted an average CTR of 0.61 percent on Jumptap's network. That figure rose to 0.74 percent with the launch of iOS 4, jumping again to 0.91 percent on iOS 5.