Inneractive reveals massive growth in its mobile advertising during 2011

February 3rd, 2012 - 02:08pm
By Matt Sakuraoka-Gilman
A whole bunch of advertising facts and figures for the year 2011 have been released by mobile ad firm inneractive as part of the build up to the Mobile World Congress, due to take place in Barcelona from 27 February.

Overall, throughout 2011 ad clicks on its network rose by 711 percent, while ad requests rose by 698 percent and ad revenue rose by 522 percent.

Cunningly the company doesn't break out any absolute figures.

Leader of the pack

In terms of platforms, Apple is leading the pack with the biggest increase (981 percent) in ad requests.

Android managed to grow its ad requests by 759 percent, while Nokia (423 percent) and BlackBerry (265 percent) followed.

On the whole, advertising spend rose by 464 percent, while the infographic also provided a region by region analysis of ad requests, showing North America and Europe boasting the most increase. 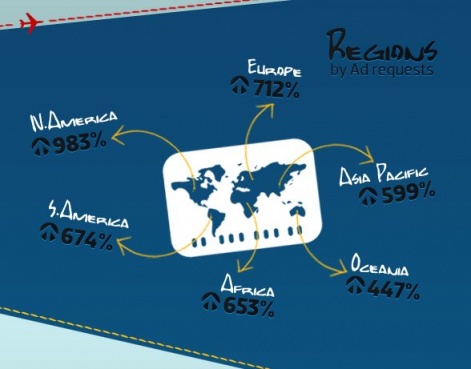 "The numbers speak for themselves," read the infographic.

"The mobile world and specifically mobile advertising exploded this past year by all possible parameters. Just wait to see what the coming year has in store..."