February 15th, 2012 - 05:00pm
By Matt Sakuraoka-Gilman
With the aim of highlighting the marketplace's most interesting trends, ad network madvertise and AppZapp have teamed up to compile a statistical analysis of the UK App Store over the previous 12 months.

A significant number of apps saw release in 2011, the two parties claim, with an average of 701 apps launched daily.

Honey I blew up the apps

December was, unsurprisingly, the most potent time for app launches, with 28,992 titles rolled out over the course of the month.

Games, of course, make up a large potion of all new releases, with stats released by both firms suggesting games are currently the third fastest growing app category on the marketplace.

In all, games attained a growth rate of 94 percent during 2011, putting it behind education-based apps on 99 percent and lifestyle releases on 106 percent growth rate.

Over on the iPad, where there were fewer apps to begin with, growth rates were substantially higher. 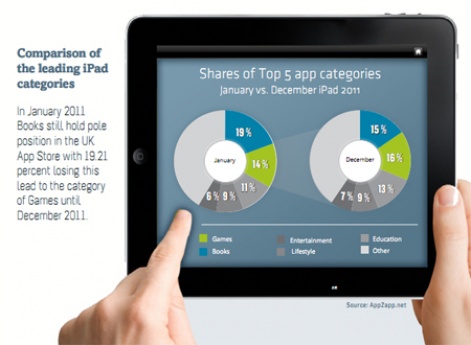 The numbers form part of the same study that recently claimed BlackBerry's smartphone share jumped 20 percent in Europe throughout the course of 2011.

The full study can be read in its PDF form here.