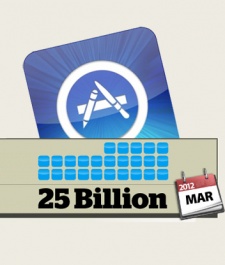 March 5th, 2012 - 10:25pm
By Owain Bennallack
On Saturday 5 March 2012, Apple revealed that the iOS App Store had delivered 25 billion apps. And few PocketGamer.biz readers will be surprised to learn that a game, Disney's Where's My Water?, nabbed the milestone download honours.

Games are such a feature of smartphone life nowadays, it's easy to forget that when Steve Jobs revealed the iPhone in January 2008, the App Store was nowhere in sight. Jobs himself described "making calls" as the iPhones 'killer app'.

Even when the iOS App Store officially opened for business in July 2008, games were hardly front and centre  except perhaps in the minds of traditional games publishers, who saw a sort of mini-PSP where they might demand £10 or more for a title, compared to the loose change they'd typically seen Java games go for.

Era of the app

How times change. The past four years and 25 billion downloads have seen prices crash even as revenues have soared, as specialist mobile game publishers have thrived by pioneering new kinds of business models...

Here's PocketGamer.biz's take on the App Store's first three years, and the landmark figures Apple's market-leading marketplace has passed in the process:

Please share this graphic by embedding it on your site: