Need for Speed serves as test-bed

March 13th, 2012 - 12:03pm
By Keith Andrew
A study by mobile advertising network madvertise has claimed pre-rolls ads  short videos that run before the promo is selected - can result in ad awareness jumping by up to 255 percent.

The stats, detailed in the firm's Advertising Effectiveness Study, used EA's Need for Speed: The Run on iOS as a test-bed, with madvertise claiming recognition by users not only increased, but the majority also liked the ad in question.

"For the campaign, for iOS devices only, before the game started, users received a mobile pre-roll ad on-screen, asking if theyd like to take part in the study, to which they could accept or decline," said madvertise of the results.

"The study lasted for two weeks with the main focus on measuring awareness of the mobile pre-roll ads the users receive, ad recognition and whether or not they liked the ad."

Madvertise claims the result was a 255 percent jump in ad awareness, a 115 percent leap in ad recognition, with 79 percent claiming they thought the promo in question was either 'very good' or 'good'. 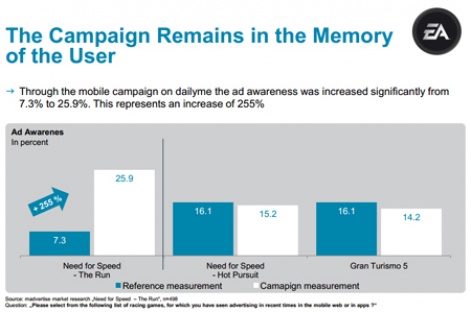 "The study, the first of its kind for mobile pre-rolls in the UK, indicates that the increasing amount of high-quality content available on mobile devices is perfectly suited for branding campaigns that are looking to engage with consumers," madvertise concludes.