March 29th, 2012 - 06:26pm
By James Nouch, Staff Writer
As of February 2012, 49.7 percent of US mobile subscribers own a smartphone, and more than two-thirds of those who acquired a new mobile device in the last three months plumped for a smartphone.

That's according to research firm Nielsen: its figures show a significant increase in smartphone penetration over the past 12 months.

Looking at the same statistics for February 2011, for instance, you find that only 36 percent of mobile subscribers owned a smartphone. 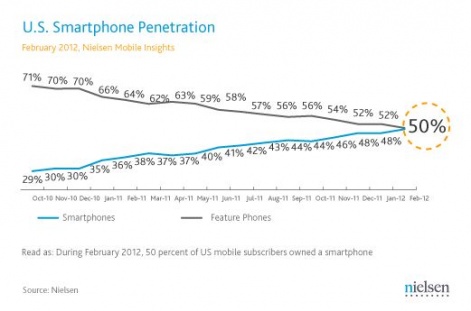 In terms of operating systems, Android is still the most popular choice.

Of those surveyed during February 2012, 48 percent owned smartphones powered by Google's OS, while 32 percent ran iOS.

But when you narrow focus to devices acquired within the last three months, the picture changes.

Google still enjoys the lead, with 48 percent of devices running Android, but the gap seems to be closing  43 percent of respondents who acquired their smartphone in the last 3 months went for an iPhone. 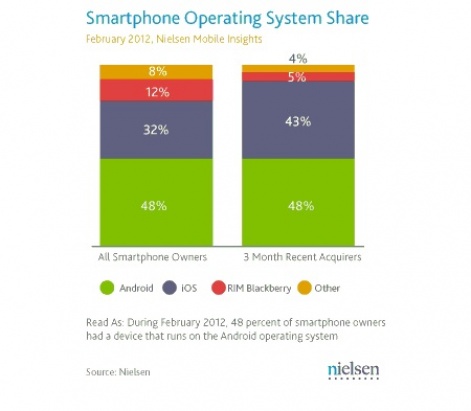 Nielsen's numbers don't paint a pretty picture for RIM, though. While 12 percent of smartphones owners in February 2012 have RIM devices, only 5 percent of recent acquisitions were BlackBerry handsets.