April 11th, 2012 - 05:00pm
By James Nouch, Staff Writer
Apple's latest iPad may have shot out of the blocks at launch, but numbers published by mobile ad network Jumptap suggest the tablet only generated a fraction of iPad traffic during its first week on sale.

According to the company's monthly MobileSTAT report, third-generation iPad traffic represented around 0.5 percent of iPad's total during its first 24 hours, peaking at 2.3 percent by its third day.

Commentators would suggest such a small level of penetration is to be expected and, indeed, arguably more interesting is CMO Paran Johar's assessment of just who is buying the tablet in the first place.

In his view, iPad 2 owners are more likely than original iPad owners to pick up Apple's latest tablet, which he understandably dubs iPad 3. 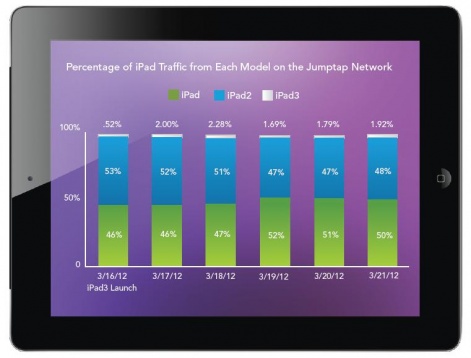 "A very early read of the data would suggest that iPad 3 is stealing traffic from the iPad 2," he said.

"This trend suggests that iPad 2 users may be more inclined to switch to the iPad 3 than original iPad users."

It's an interesting assessment, if only because the technical leap instigated by Apple's latest tablet is likely to make running a number of graphically rich games a rather jerky experience on the original iPad.

That's a factor many believed would result in many owners upgrading.

Jumptap's latest report also used third-party data to profile the differences between Angry Birds and Words With Friends players on its network.

Of the 20 million daily active users of Angry Birds, 24 percent receive incomes of over $100,000. That compares to 40 percent of Words With Friends players, according to Jumptap's numbers.