Samsung and Apple surge points to smartphone duopoly in US

May 2nd, 2012 - 11:56am
By Keith Andrew
While the latest numbers from the US market published by comScore highlight the increasingly competitive battle between Android and iOS for top spot, they also point to it being a contest being led by just two players.

The former's growth means the Korean manufacturer now holds more than a quarter of the mobile market in the US, with Android rivals LG and Motorola falling further back on 19.3 percent and 12.8 percent respectively.

As stated, Apple too has enjoyed growth, with iPhone sales pushing the firm on to a 14 percent share of the mobile market  up 1.6 percent in the last three months alone. 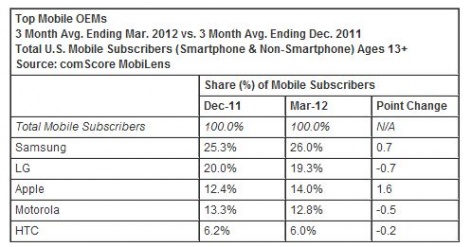 If current trends continue, Apple will overtake LG to snap up second spot in the US before the end of 2012  andachievement not to be sniffed at, considering Apple has a smartphone roster of just one fuelling its growth.

What's increasingly looking like a two-way tussle between Samsung and Apple is replicated when it comes to operating systems, with Android's share of the pie rising to 51 percent in comScore's latest report. 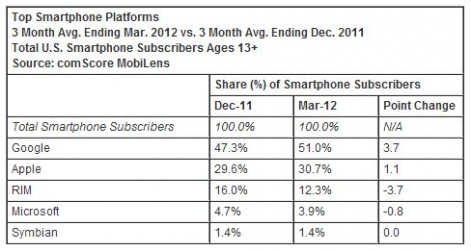 That's up 3.7 percent during the report's three month period, with iOS chasing hard in second place on a 30.7 percent share.

Former giants RIM and Microsoft continue to be pushed out of the picture, though the launch of BlackBerry 10 handsets later in the year and Windows Phone's renewed assault on the US with Nokia's Lumia 900 may well change the picture in the coming months and years.

In all, comScore claims there are now 106 million smartphone subscribers across the US market  equal to 45 percent of the 234 mobile users in total.

More details can be found over on comScore's website.