May 3rd, 2012 - 12:30am
By Keith Andrew
Conducting its first ever sweep of mobile developers, App Promo has claimed 80 percent of studios don't earn enough revenue to support their business, with almost 60 percent failing to break even.

The company, which provides strategy, marketing and monetisation solutions, said its annual developer survey has revealed the number of developers enjoying the app experience is in the minority.

Much of the problem for those suffering tough times, however, may stem from a lack of experience.

Marketing, it seems, is being overlooked.

According to an infographic published by App Promo, while 91 percent of developers think marketing is crucial for the success of their titles, 52 percent have no budget whatsoever to spend on it. 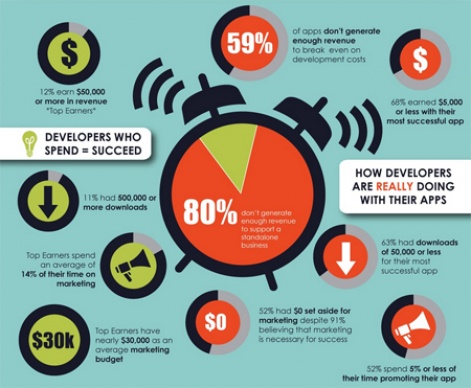 On the flip side, 11 percent of developers claim to have amassed half a million downloads or more to date, while 12 percent earn $50,000 or more in revenue.

The message as a whole is that developers need to be prepared to spend money to earn money, with top earners spending an average of $30,000 on marketing.

Reply
Matt Johnston
This assumes that every game and every developer is equal. I'm quite happy with those results if the GOOD games are in the 40%.
Posted 8 years, 11 months ago