May 4th, 2012 - 06:20pm
By Tom Worthington
Apple is generating the largest share of the world's mobile profits despite selling only a small fraction of handsets on a global scale, reports Horace Dediu of Asymco.

Dediu's analysis of reported earnings from the world's top handset vendors has found that Apple currently accounts for 73 percent of all profits generated from mobile sales.

That's from a base of what Asymco reports is an 8.8 percent share of the market.

Indeed, before the launch of Apple's iPhone 4, Asymco reports combined profits from all mobiles never topped $6 billion per quarter.

In the two years since said handset hit the shelves, however, overall mobile profits have hit as high as $14.4 billion in the most recent quarter. 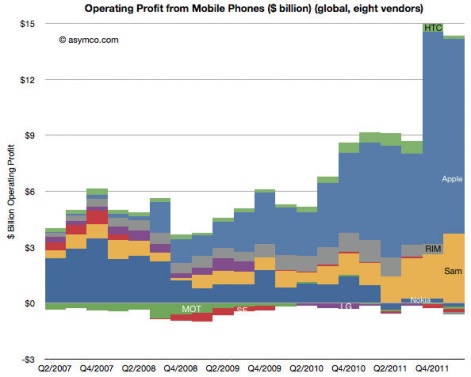 A broad look at Asymco's charts suggests that only Samsung has really stood up to the challenge of iPhone, consistently posting strong performances quarter by quarter in a market that's seen smartphone shipments as a whole rise by 47 percent.

"The industry is rewarding those who can supply computers-as-phones which preserve the cash flows of what is essentially a trillion dollar data services business," said Dediu.

"Vendors which cannot offer this solution saw their businesses implode. At least on the high end."