May 16th, 2012 - 05:48pm
By James Nouch, Staff Writer
Figures published by research firm Gartner suggest worldwide sales of mobile phones actually slowed during the first quarter of 2012, with the market falling back by 2 percent year on year.

Such numbers, however, overshadow an acceleration in smartphone take up.

With more than 144 million handsets sold across the quarter, smartphone sales were up 44.7 percent, suggesting feature phone owners are increasingly looking to the smartphone market for their next handset.

Of those 144.4 million smartphones, almost half were sold by just two manufacturers - Apple and Samsung.

Mirroring IDC's assessment of the market, Gartner's numbers proclaim Samsung the world's top mobile manufacturer, with more than 86.5 million handsets sold across the quarter  equal to a commanding 20.7 percent share of the mobile market.

Of those, 38 million were smartphones, which also makes Samsung the world's biggest smartphone vendor.

By way of comparison, Apple nabbed third spot overall and second place in the smartphone race with iPhone sales pegged at 33.1 million. 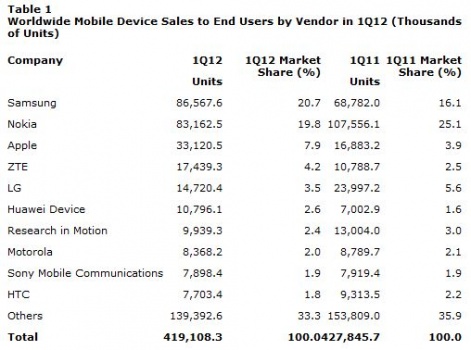 Samsung is also the dominant force when it comes to Android. Samsung handsets accounted for more than 40 percent of all Android smartphones across the globe during the quarter.

But while things are looking rosy for Samsung and Apple, other manufacturers aren't faring so well.

Nokia maintains around a 20 percent share of the global mobile market, but when it comes to smartphones, its hand it less than half the size, coming in at 9.2 percent.

Indeed, smartphone sales accounted for just 16 percent of Nokia's total mobile output across the quarter, suggesting the firm's Lumia range still has some way to go before it replaces former market leader Symbian.

RIM, meanwhile, saw its share of the mobile market contract to just 2.4 percent. Of course, RIM will be hoping that the forthcoming release of its BB 10 operating system can reverse its fortunes, but Gartner's principal research analyst Anshul Gupta isn't optimistic.

"This will be very challenging, because BB10 lacks strong developer support, and a new BB10 device will only be available in the fourth quarter of 2012."

Reply
Jim Bartlett
There will always be a market for feature phones. I do not believe that everybody will go for smartphones. Prepaid companies like Tracfone are now covering a wide spectrum of the market and will continue to do so with low costs and good service.
Posted 9 years, 6 months ago