15 of the top 20 mobile devices in US run Android

May 24th, 2012 - 11:03am
By Keith Andrew
Android's share of the US smartphone market rose to 49 percent throughout Q1 2012 according to new numbers released by Millennial Media, with Google's OS strengthening its hold at the top.

The latest report from the ad network claims Android is comfortably ahead of iPhone in the region, with numbers sourced from ad impressions suggesting iOS is currently trailing behind on 33 percent.

But while there's little change at the top, Millennial's numbers show there is movement elsewhere in the market.

BlackBerry's share continues to fall  despite the BlackBerry Curve being the second most popular device in the region  coming in at 14 percent.

That's down from the 16 percent share RIM boasted in Millennial's last report, published back in February. 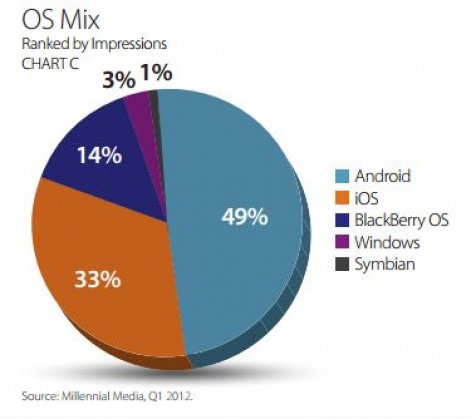 Windows Phone, meanwhile, appears to be making some progress, with its share hitting 3 percent. That's up from 2 percent in 2011  hardly the sea change Microsoft may be looking for, but an improvement nonetheless.

It's Android, however, that has the most to shout about. While Apple's iPhone remains the top mobile device in the US, 15 of the top 20 handsets now run Android  that's up from 10 a year ago. 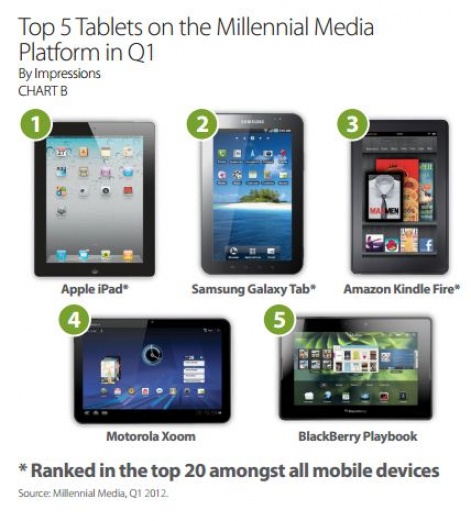 The firm quotes IDC's figures for tablet shipments overall, with 2012's projected total of 106 million set to rise to 198 million by 2016.

You can read Millennial's Mobile Mix Q1 2012 report in full over on the firm's website.