May 24th, 2012 - 11:41am
By Keith Andrew
As is now customary with most major ad networks, Adfonic has used ad impressions drawn from multiple markets all over the globe to detail the state of play in the smartphone market, proclaiming iOS as top dog.

Adfonic claims Apple's platform currently generates 45 percent of all ad impressions on its network, with iOS enjoying particular strength in both Europe and Asia.

Android, meanwhile, is the biggest platform in the US with a 46 percent share  a number that runs very close to Millennial's assessment of the market  helping Google's OS into second spot on a global basis with a 38 percent share.

When it comes to the devices behind the platform, the biggest three handsets in the market are iPhone, iPad and iPod touch, giving Apple a clean sweep of the top three.

The most popular Android handset on the market in Samsung's Galaxy S II, with the BlackBerry Curve 8520 leads the way for RIM.

But, crucially, Adfonic points out that, when it comes to click-through rates of ads, bigger doesn't always means better.

Microsoft, for instance, is a particularly strong player the firm notes, despite its OS not yet challenging at the top table when it comes to market share. 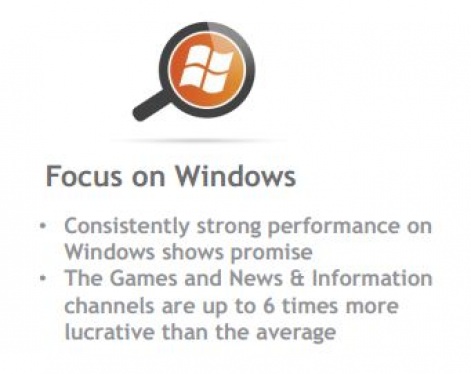 More generally, the firm claims games enjoy the "strongest click-through rates globally of any content category and generate the highest earnings for publishers and developers."

Wes Biggs on why Adfonic's isn't panicking over UDIDs, but is talking, supporting and tracking