The numbers  published as a result of joint research with app search specialist Xyologic  suggest Android now accounts for more downloads than iPhone, however, making up 63 percent of the apps picked up across Germany, France, Spain, Italy, and the UK.

As detailed in the two companies' 'madreport', 381 million Android apps were downloaded in Q1, up from 262 million in the previous quarter.

That puts it ahead of the 222 million iPhone apps downloaded. Indeed, downloads from Apple's platform were actually down from Q4 2011's total of 290 million.

The report reveals Android app downloads now top those made on iPhone in every single country of the EU5, despite the same study claiming iOS boasts a larger market share in Europe than Android  a figure no doubt boosted by the prevalence of iPad in the tablet market.

"If you're a publisher and want to get your app noticed, Android is the one," detailed madvertise in its conclusion.

"Android has replaced iPhone as the new choice for app publishers looking for reach."

Looking specifcially at the UK, madvertise claims that while Android's app rankings show a gradual descent in number of download numbers from #1 to #10, the iPhone charts are rather more uneven.
Design This Home, for instance, sits in second place on iPhone with 2,230,000 downloads. Its closest rival, Temple Run, has only 693,000 downloads, however - a sharp drop. 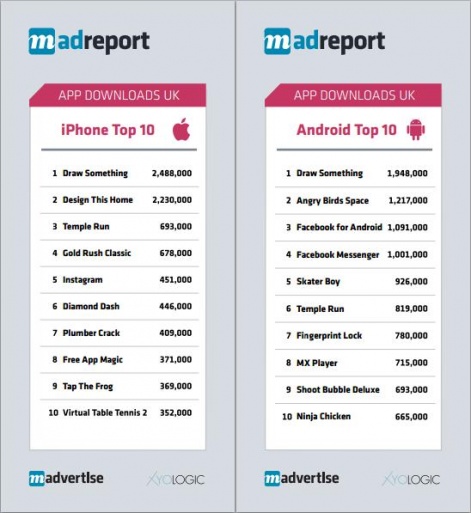 Madvertise theorises that "when apps become viral on the iPhone, it leaves others trailing", though many will no doubt question the strength of conclusions drawn from charts covering such a brief period in just one country.