Remains ahead of Microsoft

September 6th, 2012 - 11:32am
By Keith Andrew
Former market leader BlackBerry now accounts for less than 10 percent of the smartphone market in the US according to the latest figures published by comScore.

The firm's most recent sweep of the US market suggests RIM's platform fell to 9.5 percent in July, putting it well behind Apple on 33.4 percent and Google's Android on 52.2 percent.

Holding on to third

RIM will be pleased, however, that Microsoft's assertion that Windows Phone will soon supersede BlackBerry to become the third largest player in the smartphone race is yet to come to pass. 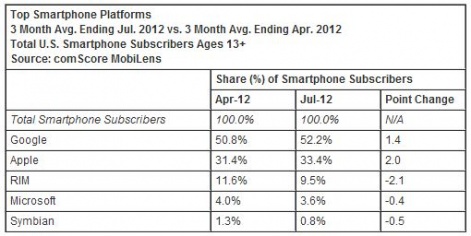 Nevertheless, RIM has seen its hand in the smartphone market demolished by rivals Apple and Google during the last three years.

PocketGamer.biz's very first look at comScore's numbers, for instance, suggested BlackBerry devices accounted for more than 42 percent of smartphone handsets back in September 2009.

As such, RIM has seen its share fall by more than 30 percent during the last three years, leading commentators to question just what will be left of the platform by the time BlackBerry 10 makes it to market in 2013.