September 7th, 2012 - 12:08pm
By Keith Andrew
Games research specialist EEDAR has claimed mobile's most lucrative and loyal consumer - the 'whale' - has been superseded.

Detailed in the body's latest extensive report on mobile and tablet gaming, EEDAR states whales  capable of spending up to $50 a month each in play  now play second fiddle to a brand of mobile gamer even more willing to part with cash in play.

The so-called 'killer whale', claims EEDAR, represents a relatively small group of consumers  around 1 percent of mobile gaming's total userbase  but each one on average spends almost $70 a month on games, making the group a prime target for many mobile outfits. 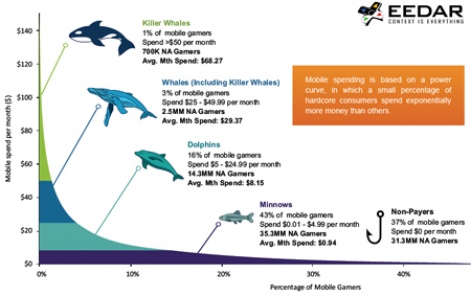 "After surveying mobile and tablet gamers, we found there exists a small, but very critical, subset of gamers whose engagement and purchasing habits significantly outperform that of what we would consider an average whale," detailed VP of analysis Jesse Divnich via email.

"We have dubbed them killer whales.

"Compared to whales, killer whales spend nearly three times as much, engagement more than twice as often, and are found to be a central hub for mobile and tablet gaming news or reviews among their social group."

According to Divnich, the small size of said group doesn't detract from its overall influence on mobile studios.

Indeed, EEDAR's research suggests killer whales are already "one of the most thought after markets for developers to target."

"Despite these killer whales being the most 'hardcore' of the consumer segments, they spread their wealth pretty evenly between genres," added Divnich.

"From RPG's to word puzzles, killer whales are a large contributor to the mobile ecosystem and understanding their behaviours is a key critical component to market success for publishers and developers."

The first segment on market size and segmentation can be ordered for $7,500 from EEDAR's website. Alternatively, all four parts can be ordered at once for $20,000 if purchased before 28 September.

Reply
Lee Weedall
Typical short-sighted thinking. Don't chase these people. Instead, focus on the groups below them, and get them to become promoters.