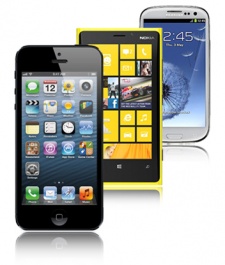 July 19th, 2013 - 03:08pm
By Alexander Beech
In amongst the suggestion that global smartphone shipments are set to double between 2012 and 2017 comes the line that iPhone sales may have peaked.

IHS iSuppli's Mobile & Wireless Communications Report claims smartphone shipments  which stood at 712 million units in 2012  will jump to to 1.5 million by 2017, based on a compound annual growth rate of 15.8 percent.

That's a rate that will see units rise to 897 million this year alone, before breaking a billion in 2014.

Cutting to the core

However, though the market overall is seeing increasing growth, Apple's success seems to have slowed.

iPhone's first quarter sales this year were 37.4 million. So, with the next generation of iPhone not expected until the second half of the year, the report speculates this could leave total sales at 150 million in 2013 - 5 million behind what the market's expected 15.8 percent growth would predict.

With top manufactures producing new high-end devices to compete directly with iPhone, while also having "lower-end handsets known as feature phones to one that is increasingly smartphone-centric", they're able to broaden their market share.

All good news for consumers because, as the report concludes, to drive sales companies must continue to innovate with features customers want.

After seven years living in Japan, pocket gaming isn't so much a choice for Alex as it is a way of life. True, he could have woken up at 6am each day to play with friends online in the UK, but he was never a morning person. Instead, he preferred a succession of meaningless encounters with Japanese teenagers. Now, he is hooked.