But trails North America by some distance 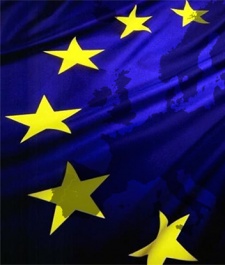 September 6th, 2013 - 04:24pm
By Keith Andrew
Businesses across Europe account for more than a quarter of the global app economy and have the "opportunity to lead" the industry in the years ahead.

That's according to a report published by VisionMobile and Plum Consulting on the state of the app industry, with the 28 countries across the European Union contributing 22 percent of the 11.2 billion (around $14.7 billion) global app economy in 2013.

A further 5 percent emanates from European nations outside of the EU, bringing the continent's total to 27 percent - still somewhat behind North America's 42 percent share.

"In Europe the growth of the app economy to date has been remarkable especially considering that it started from zero in mid-2008 and was achieved during a period when real GDP growth has been flat overall," details the report.

"Europe, with its strong adoption of smartphones, is behind only North America in terms of production and consumption of app-related products and services." 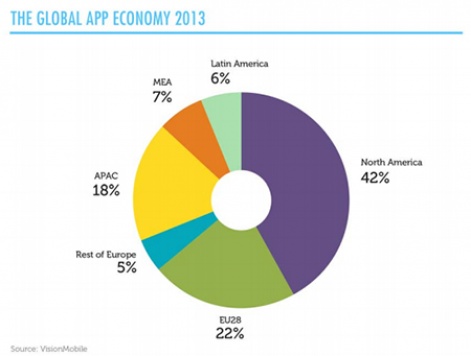 The global app economy will be worth 14.9 billion by 2016, though the real challenge rests with developers across Europe to help power the continent to global supremacy.

VisionMobile estimates that, across the EU, there are 529,000 people currently in full time employment directly working within the app economy, with developers making up 62 percent of that workforce.

"Beyond this, we estimate there are a further 180,000 people involved on a part-time basis or as hobbyists or enthusiasts," adds the report.

"This segment is an important part of the app economy, not least because it is already contributing to the App Economy in terms of revenue generation.

"Indeed, many app success stories involve hobbyists who saw their idea grow into a sustainable business, which has since become their full time occupation. Hobbyists and part-timers are therefore a key element of the job creation process in the app economy." 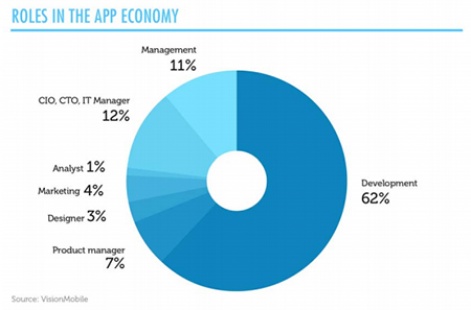 Leading the way in Europe is the UK, Germany and France, which  altogether  generate more than 16.6 billion app downloads a year, equal to 14 percent of the global total.

"The UK is characterised by high smartphone ownership, with 64 percent of mobile users having smartphones and very high demand for apps," adds the report.

"This suggests that consumers in the UK consume mobile apps at over twice the average global rate, showing very high familiarity with apps. This is partly due to the prominence of the English language in mobile apps."

But if the UK and the EU as a whole is to challenge North America at the top of the app economy, what needs to change?

VisionMobile thinks there are three areas where improvements need to be made, with "more labour market flexibility to allow transformation of the economy" top of the list.

"Second, where Europe once led on wireless it now lags," adds the report.

"Europe is behind in the transition to LTE (4G) because a fragmented market has led to staggered spectrum release and a lack of scale for equipment vendors, network operators and service providers.

"Third, different sectors or verticals in Europe will present unique policy challenges in adapting to mobile apps. Existing regulations may not be fit for purpose in the new environment; for example, the peer-to-peer sharing economy in relation to transport, finance and accommodation.

"Getting the right regulatory framework would allow Europe to be a global leader in the new phase of development in fast moving industry sectors."

You can read the report in full here.