IDC and App Annie lift the lid on US market 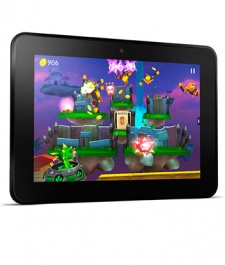 Amazon's Kindle Fire is more popular than tablets running the Google Play store in the US - at least when it comes to gaming.

That's according to the latest report by App Annie and IDC, with the two bodies claiming that Google's native store, predictably, is the second most popular in the country behind the App Store.

However, Google's strong showing was largely down to Android smartphones, with Google Play-powered tablets left flagging behind both iPad and Kindle Fire.

iOS also boasted three times more games monetisation revenue in Q3 than Google Play, which often struggles against piracy and a 'culture of freeness' - the expectation consumers have that they're entitled to free software.

Sadly, the report also found that the worldwide revenue growth of games from Q2 to Q3 was slower than the increase in revenue seen in other app categories.

Regardless, Amazon will no dobut be pleased to have toppled Android's native app store in such a major market, if only in terms of tablet usage.

You can download the App Annie/IDC report in full here.