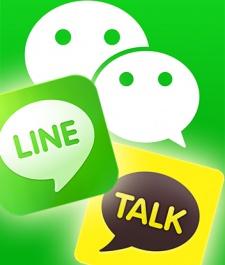 2013 was a year of growth for mobile, as overall app use increased 115 percent year-over-year.

Flurry reports that messaging and social apps, however, were the real force behind this growth, and saw an impressive 203 percent year-over-year growth from 2012.

Asian messaging titans like LINE, Kakao, and WeChat were certainly key to this growth - with LINE topping 300 million users while Kakao became the gatekeeper to cracking Korea's top 10.

Other clients like WhatsApp, FaceBook Messenger, and SnapChat also saw increased traction during the past twelve months.

Growth on the games segment, however, didn't match the powerhouse performance of messaging and social apps.

Although Flurry feared that gaming would hit "saturation levels" in 2013, the segment grew 66 percent year-over-year falling between Lifestyle & Shopping apps and Sports, Health, and Fitness apps.

The impressive growth of social and messaging apps adds further fuel to the debate as to whether they are encapsulated experiences or integrated platforms in their own right.

Given the success LINE found distributing games over the past year - over 100 million downloads in three months - it wouldn't be out of the question to see popular social messaging and chat apps transform into full distribution platforms over the course of 2014.

Beware the clash of Tencent, Alibaba, Baidu and 360, warns Yodo1