The average saving when buying an App Bundle is $5.64

AppFigures does the math 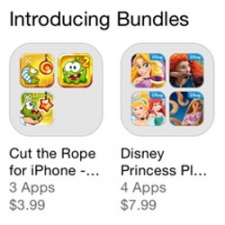 The biggest change to app distribution in 2014 has been Apple's decision to allow up to 10 apps to be wrapped within a single downloadable bundle.

Certainly it's a great way for consumers to get a lot of content for a discounted price.

But how is it working for developers?

App store market intelligence outfit AppFigures has been checking out the early stages of the trend and come up with some interesting numbers.

There's a lot of interest in bundles from developers with the total number released now heading towards 4,500, although around 20 percent have since been removed from the App Store.

In terms of what's in those bundles, most developers are being conservative with three or four apps in a bundle, although there are a surprising number who are going all-in and packaging up the maximum number.

For consumers, savings on the bundle price to the combined price of all the contained apps demonstrates one clear positive; although there's a lot of variation depending on the number of apps in a bundle, the average saving is $5.64.

And the maximum saving from a single bundle is $98.95.

You can check out the full dataset from the AppFigures blog.

Reply
Chris Noeth CEO at McPeppergames
If you are interested in our app bundles for kids you can find them here:
https://itunes.apple.com/artist/mcpeppergames-ug-haftungsbeschraenkt/id500483218?l=en