How do your push notification metrics compare to industry benchmarks?

You could do better 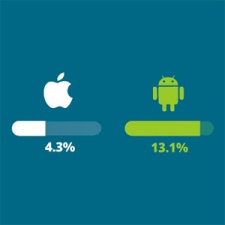 As anyone who's watched my First Time User Experience videos knows, I'm generally amazed at developers' lack of care when it comes to push notifications.

One of the best and cheapest ways of engaging with your players and driving retention, push notifications are too often implemented in a careless and frankly impolite manner.

Yet as a new report from Accengage, which is based on 38 billion push notifications makes clear, if they are treated correctly, push notifications can be very powerful, especially on Android, which currently has 100% opt-in, although this will change when the Android M OS launches.

Game developers have much to learn, though.

On iOS, it's 4%, while its 8% on Android. Both rates are half that of the best sectors.

It's also clear that the tech generates very different reactions in different geographies.

Europe is much more responsive than South America and Asia, for example.

As for takeaway advice, Accengage points out that developers can optimise their opt-in rate by explaining what push notifications are for in a splash screen before triggering the iOS Push Notification permission request box.

This is important as you can only show the iOS Push Notification permission request box - so don't show it before players have even launched the game!

Below; an example of how not to integrate the iOS Push Notification permission request box.