Two games that changed everything 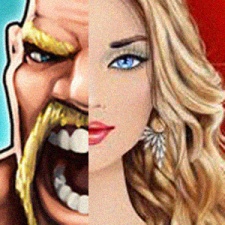 Given Glu Mobile has been around for more than 15 years, it’s no surprise the company has experienced some changes along the way.

From Java and Brew to App Store and Google Play, from paid to F2P, from licensing Hollywood movie IP to…. well, licensing LA celebrity IP, the types of mobile games Glu makes have changed radically, just like the technology and business models.

The company’s had plenty of corporate ups and downs too, but it’s certainly on the up now.

If you look at a graph of how its revenue has fluctuated over the years, there in a nutshell, you’ve got a story of the three stages of Glu Mobile, which has been transformed, almost accidentally, by two games.

A flower for every rifle

If you look closely at its web presence, you will still find Glu Mobile labelled as “The leader in 3D freemium mobile gaming”, and until 2014 that was a pretty good description of what the company did.

Gun Bros was perhaps the best example, but there were plenty of others: the Frontline Commando series, the Contract Killer series, the Eternity Warrior series, the Blood & Glory series etc. The legacy continues in its Deer Hunters games.

It could even be argued Glu isn’t making games anymore.

Indeed, what we could now label ‘Old (Manly) Glu’ is still part of the company today, with games such as Racing Rivals and MLB Tap Sports Baseball 2017 - to be joined by a new WWE game in 2018 - accounting for around a third of annual revenues.

This all changed in June 2014, with the release of Kim Kardashian: Hollywood.

Making U a star

The first of Glu’s celebrity-licensed titles, it was technically the third release in its Stardom series of lifestyle games designed for young women. The first two - Stardom: The A-List and Stardom: Hollywood - were decent enough but without a celebrity to power them, they didn’t find any audience.

The success of Kim Kardashian: Hollywood - which has generated over $200 million in lifetime revenues - ultimately led Glu into a cul-de-sac, though. There it wasted large amounts of cash signing deals with celebrities to release branded games that didn’t make any money at all.

A much better investment was the acquisition of Diner Dash developer Playfirst, also in 2014. This deal, which was valued at $16 million, has resulted in two successful games. Combined, the Cooking Dash franchise and celebrity spin-off Restaurant Dash: Gordon Ramsay have generated over $100 million in revenue to-date.

Yet when we combine the revenues from ‘Old Manly Glu’, which what we might label ‘Celebrity Glu’, it’s clear the company would be in big trouble if that was all it consisted of.

Instead, the catalyst for the company’s current position is - what in retrospect - looks like the deal of the century.

As with many startups formed in the late 2000s, by 2016 San Francisco-based Crowdstar had burned through plenty of VC cash ($49 million) and pivoted from Facebook to mobile. But it had remained true to its original goal, making games for girls and women.

Indeed, like Kim Kardashian: Hollywood, Crowdstar’s most successful release, Covet Fashion, had underlined the significance and value of the female market. It also generated the bulk of Crowdstar’s $48 million in annual revenue.

The company wasn’t profitable, however, and with new interior design ‘game’ Design Home due out, it appears there was a disagreement between the company’s executives and its investors.

The catalyst for the company’s current position is - what in retrospect - looks like the deal of the century.

It’s not clear what this was about, only Glu Mobile acquired Crowdstar in November 2016 for the incredibly low price of $45.5 million and that CEO Jeff Tseng didn’t transfer over.

And the rest is history. In the 12 months since Glu acquired Crowdstar, Covet Fashion and Design Home have generated over $110 million in revenue, with Design Home accounting for 64 percent, although it should be pointed out Glu has also spent over $30 million marketing Design Home.

Which brings us neatly back to the three parts of Glu’s business.

Each has its place, and each can point to a strong performance in terms of key titles. Yet what we can call ‘Lifestyle Glu’ is clearly the most important, the fastest growing, and the sector still with the highest growth potential, especially when you consider The Swift Life, Glu’s social network with Taylor Swift, is due out later in 2017.

And perhaps that’s the irony of the situation.

Now, the vision has changed once again, almost accidentally.

It could even be argued Glu isn’t making games anymore. Certainly Covet Fashion, Design Home and The Swift Life - really a social network with IAPs - stretch the definition of what a game is close to breaking.

But given it’s never been more successful, frankly who cares?