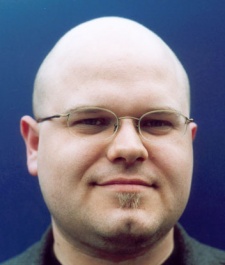 February 6th, 2009 - 01:16pm
By Jon Jordan, Contributing Editor
New mobile devices are cool and shiny but their insides are often even cooler, if less shiny. Take the iPhone and iPod touch for example. Beautiful, tactile design on the outside, but it's their insides that mean developers can make great-looking games.

Alongside dozens of other devices manufacturers (including Nokia and its N95), Apple gets its 3D chip design from UK company Imagination Technologies. Indeed, Apple is now a 4 per cent shareholder in the company.

Still, Imagination also has a long history of involvement with games; its POWERVR brand has been used in PC graphics cards and was the 3D chip for Sega's Dreamcast. There were also plenty of rumours last year that it was involved in a new Sony device, with heady speculation lining it up for PSP2.

That remains completely unconfirmed, but we did catch up with longtime head of PR David Harold (pictured) to find out, more generally, about Imagination Technologies's views when it comes to future mobile devices.

Pocket Gamer: Faster, cheaper, better is always the default headline for chip designers, but do you see any other broader trends for portable devices?

David Harold: You missed low power. That's the trick: users and developers want high performance, but users don't want to have to have to charge their devices up every time they complete a level.

Right now extra processing power is particularly going into targeting higher resolutions. High Definition and mobile are coming together, and not just for mobile internet devices and console-class devices either.

Soon phone developers will regard HD resolutions as the norm in the smartphone segment, whether on the device's screen or playing out to HDTV.

Otherwise you got it on the nail. You have to innovate on tools and features for the developers, on silicon area for the chip guys and on power for the device guys. How successful you are depends on the three of those together.

The difference in power consumption is particularly noticeable when you're moving from something like an N81 to an iPhone or N95, so how important is matching performance to power in terms of how you design chips?

It's incredibly important. Currently devices are offering a level of use that people can live with, but yeah, the difference is noticeable. What we will get to a product generation from now are devices where we start forgetting about it again. The battery life will be just fine.

But we're constantly working on new ways to save power: being better integrated with the system on a chips; ever more sophisticated power management; and ensuring the application can take full advantage of that.

What do you see in terms of the future of portable device screens as it seems that the iPhone/iPod now defines the upper physical screen size for a portable device, or will the HDTV-out hype continue?

I'm convinced that HDTV-out won't just be hype. We'll be playing the nextgen of mobile and video devices on the train and then on the big screen at home, and the graphics capabilities will be up to that full HD, shader-based challenge. I'm saying they'll be as good as the current generation of games consoles.

We'll also see a relentless move to higher resolutions in all mobile products. Many Wide VGA screens are coming out this year, for example.

Personally I think that no one needs a screen larger than 7" across - you just keep squeezing more resolution into the same physical space. (You'll have to quote me on that in ten year's time when we all have huge pockets and 12" screens - make me look like an idiot!)

Does the introduction of features such as in-phone projectors have an impact on your chip designs?

Projectors are neat and I want one, but the answer is not really. We have display pipeline IP and image enhancement IP that will help with projectors or screens but we're more focused on the screen as the primary display mechanism.

How do you think the current economic climate will affect the development and adoption of your most advanced intellectual property in terms of mobile devices?

So far there's not been a slow down in adoption, indeed much of the licensing in the past six months was at the high end of our IP offering - which, by the way now, includes a multi-processor solution that can scale to the very high end of performance if needed.

The timescales our customers develop to mean that devices now being designed will hit the market hopefully after the dust has cleared on the credit crunch.

I think it's been proven in this industry before that developing through recessions is a strong strategy if you can afford it. You get to come out ahead of the competition when spending picks up again.

On top of that Imagination Technologies's IP is mostly in newish device markets that are going to continue to grow, even if the overall phone or consumer electronics markets shrink. Maybe they won't grow as fast, but fast enough that we shouldn't see too much backward movement in unit volumes.

We think that, with the market leading IP offering, we'll weather the storm, but there's no doubt that this current economic climate will take a heavy toll across every industry, ours included.

Considering Qualcomm's Zeebo console for Brazil, do you think that Imagination's IP could end up in consumer electronics such as Sega's Dreamcast again in future?

How big a deal do you think that Flash 10 and Flash Lite are, and what are your opinions about the Adobe Open Screen Project?

Flash matters. You can't say you offer a full internet experience and not support full desktop Flash. And with Flash Lite delivering content for a highly mobile device class too Adobe has a strong offering.

We've been working closely with its engineering teams to develop acceleration solutions for Flash Lite, and the desktop Flash Player, for over two years to show how beneficial hardware acceleration can be for the enhancement of internet browsers and other applications.

We showed some of this off at CES and there'll be more demonstrations of POWERVR-accelerated Flash soon. We're in so many key devices being used for mobile internet devices, netbooks and many other devices as well as phones. We think Flash acceleration is a big thing for the future.

We're all for the Open Screen Project too, but we need a wider install base for acceleration to be regarded as an integral part of this initiative. We're probably a year away from that in the markets we deal with.

Thanks to David for his time and candour, and we'll no doubt will be hearing more about devices using Imagination Technologies's smarts at Mobile World Congress.