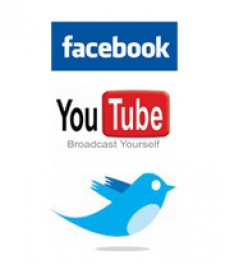 March 3rd, 2009 - 05:49pm
By Stuart Dredge, Contributing Editor
The problem with social media - Twitter, Facebook, YouTube and so on - is that companies and brands can easily turn it into antisocial media, if they try to use these sites and get it wrong.

Corporate spam, over-zealous marketing, content that even the CEO's mother wouldn't be interested in, and general dad-on-the-dancefloor cluelessness can have a crippling effect on a company's use of social media. And then they wonder why it's not working for them.

Often, the problem is that companies haven't thought it through - they just want a Facebook presence or Twitter feed because it seems cool, or because their investors told them to, or because everyone else has one so what the hell.

However, companies using social media in the right way can reap the rewards, whether those be promoting their products, engaging with their customers, or simply sharing knowledge with their peers.

That holds true for the mobile games industry too. Recent months have seen an explosion in developers and publishers using social media to connect with consumers, media and each other.

Some have done it well. Others are a bit unsure. And a fair few are (metaphorically) doing their best John Travolta steps and wondering why their family and friends are all laughing at them.

With that in mind, here's our stab at a five-pronged social media strategy for mobile games companies - how you can use Facebook, Twitter, YouTube and your own blog to market your mobile games, and how they should work together (that's the fifth prong).

There are several ways to use Facebook, and thankfully some good case studies showing how to do it well. The most obvious one is to turn your mobile games into Facebook applications, with click-through links for players to buy the mobile or iPhone versions.

The two most successful examples are probably Digital Chocolate's Tower Bloxx and I-play's Bubble Town, although other firms trying it include Namco Bandai Networks, Gameloft and Nokia.

Do these Facebook apps drive more sales of your mobile games? Anecdotally, yes - DChoc was very impressed by the conversion rates for Tower Bloxx, while Bubble Town became one of I-play's top-selling mobile games last year, fuelled by its Facebook popularity.

The key, of course, is the link - meaning it's only really effective for driving sales if you can link through to your own site, operator decks or the App Store. It's also worth investigating companies like Mpowerplayer, which offers a dedicated Facebook mobile game discovery application. 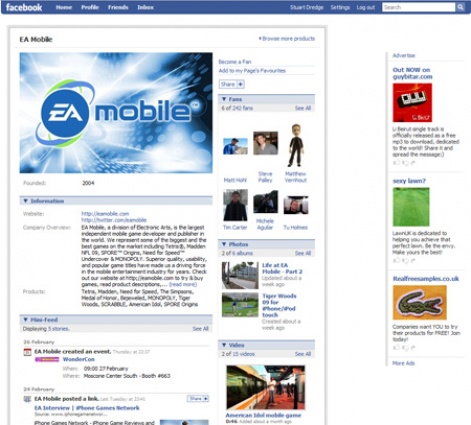 The other way to use Facebook, though, is to maintain your own official Fan Page. Check out EA Mobile's for a great example - they regularly post screenshots and gameplay videos of new titles. Glu Mobile has a similar page.

It's the regular updating of the content that's important. However, going forward it may be more effective to launch individual fan pages for specific games, especially your most popular ones. The official Bubble Town fan page has more than 10,000 fans, for example.

Another trend that will increase is for mobile and iPhone games to tie in with Facebook news feeds. There's scope to do very simple yet powerful things with the Facebook Connect technology - letting people post high scores on their profiles, or embed widgets with their achievements.

Twitter is still pretty controversial when it comes to companies using it - many still see it as a great big time waste, while others are concerned about rumours Twitter may start to charge brands for its use.

Even so, that's no excuse for not diving in and finding out how you can use it. The most obvious use is to announce new games, reveal new gameplay details, remind people about iPhone updates, and link to reviews of your games.

It shouldn't be spam, though - both EA Mobile and Gameloft are using their Twitter feeds (here and here) to announce new games for the first time, or link to just-posted screenshots and videos. They give people a reason to sign up to the Twitter feed, in other words.

But Twitter isn't just about the big guys. Hundreds of independent developers are using Twitter to do the same thing, while also engaging with player communities, offering promo codes, and chatting about the development process. You can find a big list of them here. 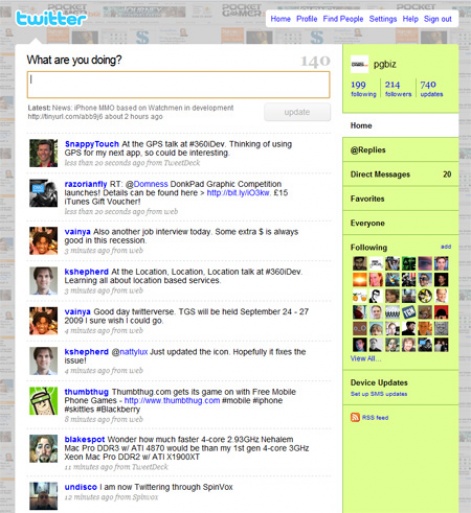 Two more things to note about Twitter: first, lots of journalists and bloggers will follow your feed, as well as gamers - so it can be considered as part of your PR investment.

Second, Twitter is above all about conversations, not just one-way marketing. So be prepared to check your replies and direct messages, and to respond to them.

And that's not just from consumers, but from your rivals too - swapping knowledge and giving/getting encouragement are key reasons to be on Twitter if you're an indie developer.

If you're making mobile or iPhone games in 2009, why on earth wouldn't you have your own YouTube channel full of gameplay videos and trailers?

They don't have to be BBC-quality - just pointing a decent digital camera at someone playing a game is a good start, although if you're planning on shooting regular vids of your games, a tripod and some basic lighting isn't a huge cost. 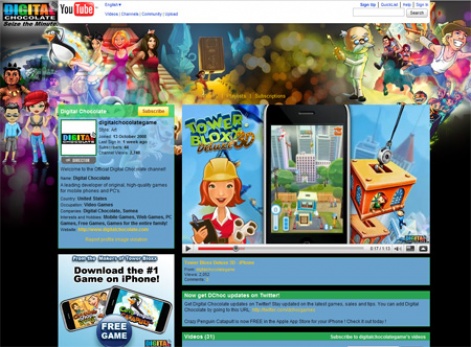 But YouTube videos are marvellous marketing material for two reasons. Firstly, they give gamers a taste of your game - how it plays, how it moves, how it's controlled - that they won't get from an operator portal or even the App Store.

Secondly, us media types - journalists and bloggers - love YouTube videos, because we can embed them in our stories. Ask Digital Chocolate, or Glu Mobile, or TAG Games, or Gameloft, or any of the other dozens of publishers with their own YouTube channels.

If you read Pocket Gamer, you'll notice that increasingly often our news stories come with YouTube videos uploaded by the developers themselves - indeed, the first gameplay video of a hotly-anticipated game is often fuel for a news story in its own right.

YouTube also fits well into a drip-feed marketing strategy, where you upload a new video every couple of weeks (or every day in the run-up to a game's release), showing off different aspects.

PRONG 4: YOUR OWN BLOG

A lot of games developers have set up their own blogs in recent years, but the results have been mixed. Some are witty, insightful, full of interesting nuggets, and properly nerdy about the mechanics of game development (in a good way).

But others are dull, infrequently updated, full of pure marketing messages, or improperly nerdy about the mechanics of game development (in a bad way). It can go either way, if a company blog isn't properly thought through.

When they're good, they're invaluable. We're seeing iPhone developers reveal their learnings about App Store pricing on their blogs, for example, or developers revealing the latest progress on their brand new games (or, indeed, announcing them).

Your blog is your voice to the world - consumers and journalists. iPhone has changed this whole area, in that both of those groups DO want to read ngmoco's ideas blog, or see Fishlabs's latest controversial statement, or find out how Connect2Media's Volker Hirsch sees the industry. And that's just three examples plucked from my RSS feeds. 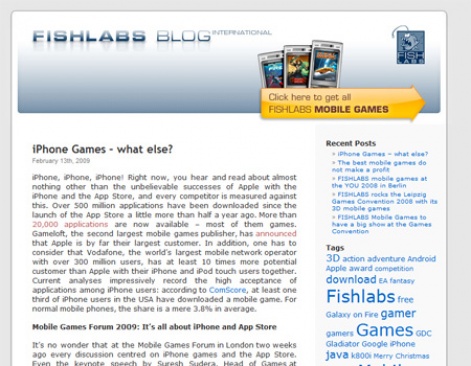 The key to getting it right? Regular posts are essential, and true buy-in from the people in charge of the company - a blog that's not allowed to blog about anything interesting... isn't interesting.

In the world of the operator decks, marketing is all about negotiating deck space and sorting out your porting and certification. But as the industry shifts towards more open models, building anticipation around games in the months and weeks before their release is going to be more important.

A blog gives you some control over that process - it's the perfect medium to release information, screenshots and opinion. In other words, it's not navel-gazing. If you do it right, it will make you money - or at least enable your games to make you more money.

On a separate note, engaging with other blogs and bloggers is becoming a vital part of mobile games marketing too. That means knowing who writes about mobile games, and how influential they are, as well as monitoring who's talking about your titles online and joining the conversation.

PRONG 5: All of the Above

Okay, maybe less of a prong, and more of a canopy. Or something. The most important thing about using Twitter, Facebook, YouTube and Blogs is that they shouldn't be treated as separate silos - they should all work together.

Just posted a new gameplay video on YouTube? Let people know on your Twitter, add it to your Facebook fan page, and tap out a quick blog post about the features shown within the video (while embedding it, naturally).

The point is that all these different types of social media are connected. Big companies like EA Mobile have a specialist social media person nowadays - it can be a full-time job.

But even if you're a smaller company working lean and mean, making time for someone to do this stuff and make it work together can - at last - build some proper buzz around your mobile games. And stuff like App Store deep-linking means you can often track direct sales as a result, too.

At least, that's what we think. So before we rush off to Tweet the link to this story and share it with our Facebook friends, we'd like to hear your thoughts on social media - and specifically your tips for making the most of it. The Comments floor is open...

Good roundup of tactics and services.
Just yesterday I had a simillar conversation with a large scale service provider who deals with "Ad-Networks"

WeÂ’ve built a business around social media marketing for mobile apps and services. Do give our blog a read over at Â– http://blog.appsmarketing.mobi

Keep up the fantastic work on your blog and reach out to us anytime, weÂ’d love to help.

Reply
Pavel Liskin International Sales and Business Development Manager at Dynamic Pixels
One of the most important things in gaming marketing is to be in a close contact with the journalists and bloggers around the world we have to face the truth they are the lads who are all toghether with the devteam of a title from the concept writing to the release.

Thanks a lot for a great article - Â“must print and rereadÂ”.