The template to touch success 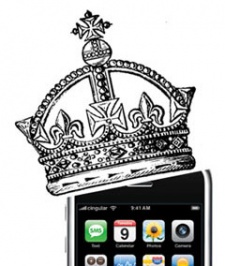 1. Develop for the device

The iPhone has a number of features that make it much closer to a games console than a traditional mobile phone. The first is that unlike every other mobile platform it's a unique device.

The iPhone (and iPod touch) are effectively a single device, with a consistent featureset and a unique development environment. So develop a game that takes advantage of this and is built from the ground up as an iPhone game. When an iPhone game comes with a virtual D-pad - for example Real Football - the developer should be shot.

2. Use the touch interface the way its supposed to be used

The touch interface is the single key feature of the iPhone as it's the only way you can interact with the device. This means you shouldn't create a game where using touch controls make the game harder to play. Instead, consider the likes of Flight Control to experience an interface that works perfectly on the iPhone but that would be a nightmare using buttons or a D-pad

In addition however, many iPhone games that take advantage of touch don't use multi touch. Copying a mouse interface is okay, but multi touch is where the iPhone really shines.

3. Use, dont abuse the accelerometer

Let's be honest, it's very cool to control something by moving your phone around. The problem is that, in reality, it's a bugger to control with any accuracy. It's good for big movements - shake of the dice say - but not for fine control. The one thing the accelerometer does allow however is for the game to know which way round a device is, so why do so few use this to recognise orientation and change the view?

GPS is a very cool feature that is massively underused in iPhone games. Knowing where your device is, and where other potential players are, is something that could add massively to the playing experience, although you will have to think about how to deal with iPod touch players, who lack GPS.

5. Use the interface provided

Apple created a great interface, which allows you to flick scroll to speed up page viewing and use two fingers to pinch zoom, to name just two. So why do so few games use this? If you are scrolling around a map, it should feel like the rest of the interface. Buttons should zoom as the keyboard buttons do to make them easier to hit. All of this and more should be used in games, both because it makes the games feel a coherent part of the iPhone and because it improves usability.

When PlayStation came out, everyone got obsessed with 3D. Suddenly every game had to be in 3D. It's only with the likes of Xbox Live Arcade that developers are realising that you can still make great 2D games. The iPhone is a capable 3D device and certainly some 3D iPhone games look stunning, but adding 3D should only be done if it adds to the game experience. Simply put, most of the best games work better in 2D, especially on a small screen.

Making a game for 59p is a very different proposition than one that will sell for £45. I've had endless arguments with people about what constitutes a good value 59p game. It generally boils down to the question of 'What makes a good game?' A game should be fun, and something that is enjoyable to play and keeps you coming back for one more go. If it doesn't do that, it isn't worth anything. Not even 59p.

If you are going to charge more, you'll need to demonstrate added value, whether in terms of more levels, better graphics, or a licence. But remember, you can only add value to something that has basic worth.

Equally, no other dplatform allows you to sell a game so cheap, so take advantage and make games that couldn't be sold anywhere else.

Games for iPhone are not experience games. They are time fillers or what I call Bubble Gum software. They need to be simple. Most people aren't looking for massive depth, just 5 minutes of fun. So keep this in mind, design a game and then rip out 80% of it and see if it's still fun. If it is, you might just have another Tetris or Flight Control. If not, you probably should be designing for a different platform.

One of the biggest challenges with iPhone is choosing your genre. The charts are an eclectic mix. There's everything from god games to gold mining. The classic sports and action genres that dominate console games are much less obvious, and licenses don't sell anything like as well as on mobile.

What seems to grab players are simple, fun, fresh, amusing concepts. Your game needs to stand out, be original, and as easy and obvious as possible - yes, dare I say it? Casual.

The iPhone is all about building a relationship with the end user. By getting great user reviews you'll drive your app up the charts, and by supporting the app with great updates you will get more user reviews.

The iPhone, together with the App Store, are the first platform to put the power in the players' hands, and it's those developers and publishers who build a community and create a buzz around their games who will succeed. This is a massive switch from mobile where it is the size of the marketing budget rather than the quality of the game that defines the success of your game.