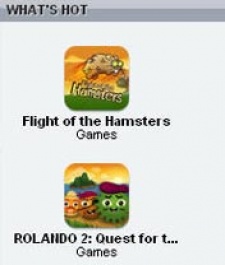 August 9th, 2009 - 09:00am
By Chris Wright
Making an iPhone game is easy, but getting anyone to buy it is something else entirely.

So what are the secrets to App Store sales? Here's my top ten list of things to consider.

It seems obvious but more than any other platform, the App Store's user reviews mean that polishing turds will not work. If you release a game that hasn't been properly tested, let alone one that isn't fun, you will be roasted alive within minutes of launch.

You may be providing a game but on the App Store, users expect it to evolve and that you will constantly add value to your initial release. The best service games are those that connect with their players and use the feedback from user reviews for updates. This concept of delivering a core game and adding value is key to success and something that is vital to embrace from the earliest stages of your game design.

Getting the price right is vital but tricky. Do you start high and then drop the price to encourage sales or stay low? It's certainly brave to start at 99c/59p as you can't drop the price any lower. Users are also price sensitive, so apps such as App Miner and AppSniper, which track apps that have cut their price do drive sales. Launch price is always a judgement call, but unless you know you have enough consumer interest to drive straight into the Top 20, you should probably avoid the lowest price point.

The concept of dropping your price to drive sales is hardly new, but Peggle did it so successfully it's provided a new verb for the tactic - peggling(TM). By giving away a more expensive app for 99c/59p for a short period of time, you can increase sales massively.

5. Build a relationship with your users

The App Store is community-driven, so getting people to download your game and rate it is vital. To do this you need to build a marketing campaign that gets people excited. This is about building a relationship with the media and your users, getting to understand what they want, and encouraging them to promote your game for you. A fan of your game is worth so much more than you telling everyone how good it is.

6. Get the release date right

This is a small issue, but make sure your app is launched with the right date. The number of apps that launch listing the start of their development date is amazing and this is a great way for your app to disappear down the list before anyone's seen it.

Especially if you're making a game that's more expensive than 99c/59p, then a Lite or free version is vital, and it should launch with your paid app. Also think about the Lite version. The best examples show off the game and leave the player on a cliff hanger. Just giving away the first 'X' levels of a game is a bad idea.

If the app is below 10 MB in size it can be downloaded over the air. More than 10 MB and it needs to be downloaded either through a PC or via Wi-Fi. This reduces the likelihood of an impulse purchase and will hence reduce overall sales. This might not be applicable to big apps such as The Secret of Monkey Island, but if your app is around 12-15 MB you should seriously think about how you can get it below the magic 10 MB level.

Updating little and often is key to delivering a service, and it will also drive your app up the sales charts. Of course, you have to ensure you add value with each update or you will quickly annoy your users.

Making a me-too game isn't going to help you to stand out from the crowd. People buy games to entertain themselves and they are always looking for something that looks fun and quirky. So it's important that you're different - in a good way - your game has an interesting name, exciting screenshots, and a well designed icon. These all helps to differentiate you in what is already a very crowded market.