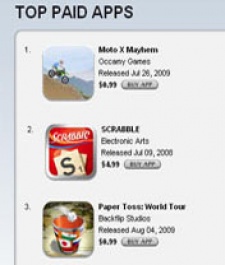 August 24th, 2009 - 08:30am
By Jon Jordan, Contributing Editor
The past week has been a good one for EA Mobile. The release of puzzler Snood, combined with a couple of re-entries, has seen the company take 13 places in the US Top 100, up from 11 last week, and 9 back in last July.

More importantly, in terms of revenue, it has five games in the top 20, which is where the majority of sales take place.

Yet this re-positioning of titles higher up the charts has come at the cost of margins.

Another studio that also had a great week Tiger Style, which was founded by two ex-EA developers.

Its game, Spider: The Secret of Bryce Manor ($2.99), has been picking up great reviews and motoring up the chart. It's now at #5, from 61 last week, and seems certain to go even higher.

Gangstar in with a bang

EA rival Gameloft hasn't been resting on its laurels.

The highest new entry, at #10, was 99c viral game Sheep Launcher Plus!

There was also a new #1 as Occamy Games' Moto X Mayhem (99c) finally made it to the top of the heap after weeks of steadily moving up the charts.

In general though, there was less activity in the chart than seen in previous weeks.

The basic measure of churn - the number of games dropping out, replaced by new and re-entries - was only 16.

As for games shedding places, id's Doom Resurrection dropped from #8 to #45 as its price went from $2.99 to $6.99 following the end of its Quakecom sale.

Less about price, and more about the lack of a bug fixing update, Duke Nukem 3D dropped from #21 to #99.

Games are getting cheaper again

This is thanks to the number of $4.99 priced games from big publishers such as EA, Gameloft and 2K.

Indeed, no other publishers have such expensive games in the top 50, demonstrating the power of those companies to provide high quality and/or licensed content and persuade gamers they are getting full value for their purchase.

The average price of games positioned between 50-100 is reduced however, as 99c games have been shifted out of the top 50. 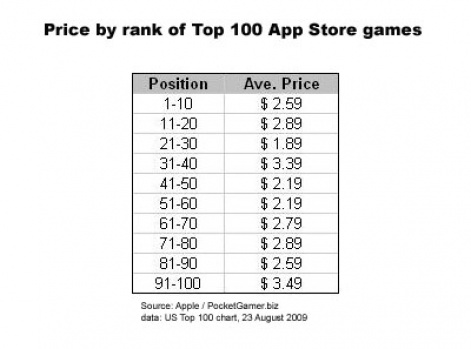 When it comes to the price breakdown of the chart, there are no games in the highest priced categories. This is mainly due to sales which sees some of those games now priced at $6.99. 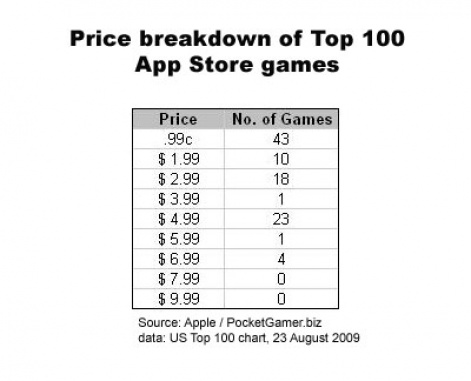 What is clear however is that $4.99 price point is increasingly being viewed as the sweet spot for publishers who have games they have invested significant time and money in developing.

The power of the big two grows

As previously stated, EA has increased its standing on the Top 100 with 13 games in the chart. Although its average price has dropped by 12 percent, the increased volume of sales thanks to higher chart position is likely to have improved overall revenue.

Gameloft has also increased its chart presence thanks to the release of Gangstar: West Coast Hustle. Its $6.99 price also lifts the company's average by 11 percent. 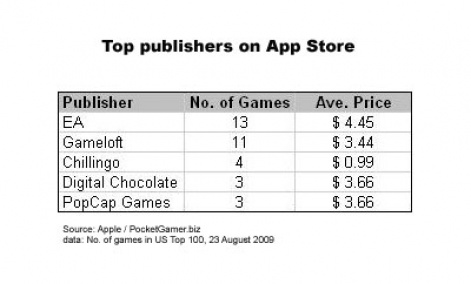 Both Digital Chocolate and PopCap Games are in exactly the same position as last week.

Reply
jon jordan
Yeah, these are good points but because the US is 50% of the world market, you have to focus on it. UK, Germany and France are the 2nd, 4th and 5th largest markets but Switzerland and Spain are fairly marginal.

Also, should we be surprised an NFL only features in North America?

Still, I will looking at App Store regional variation as times allows in future ; )
Posted 12 years, 5 months ago

Reply
Julien Roy
Even if it is by far the most important market, the US charts does not reflect worldwide sales.

For example :
- NFL is currently 4th in both US and CA stores, but is not in any other country top 100.
- The Secret of Monkey Island is out of the top 100 in the US, but still 1st in Germany, 2nd in France, UK, Swizerland and Spain, 6th in Australia, etc.
- Gangstar: West Coast Hustle is currently 1st in France and Swizerland, 2nd in Germany and Spain, etc.

The main points (effects of pricing on rankings) stay valid, but there can me massive differences depending on culture, on if the game is localized or not, etc.

Reply
jon jordan
Well it has Deer Hunter 3D at #22 and Mini Golf Wacky Worlds as a new entry at #36, so not completely MIA