The proof is in the graphs 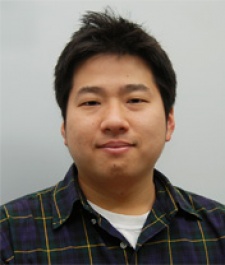 September 10th, 2009 - 11:00am
By Jon Jordan, Contributing Editor
As recently reported, Homerun Battle 3D is the new name for Com2uS' Baseball Slugger: Home Run Race 3D, which is one of the first real-time online sports game in the App Store.

The decision to change the name of a released game is obviously significant but, according to Joony Koo (pictured), team leader for global business development team at Com2uS, it's just part of a wider approach from the Korean publisher, which is looking to position itself as the best real-time network developers on the App Store.

One obvious reason is to ensure it stands out from the huge amount of games in the App Store, but there are other benefits.

As for Homerun Battle 3D itself, it's a baseball game where you use the iPhone's accelerometer sensor to control your batting contact point and you tap on the screen to control the bat's swing. 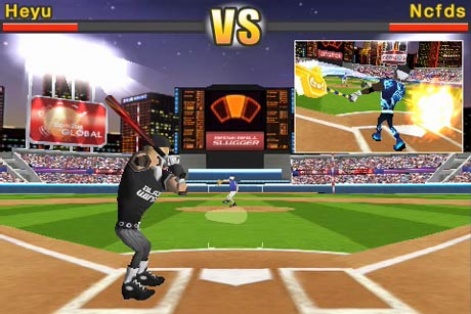 What gets people hooked however is the online match-up feature.

This means you can play head-to-head against another player, with a small box in the top right corner of the main screen showing you what your opponent is doing. This is also highlighted by a score bar of hits which shows who's closer to winning the match.

Still, Homerun Battle 3D is not a lightweight game when it comes to graphics and Com2uS also has to deal with issues such as the wi-fi and wireless conditions when people are playing.

"We've tried to minimise the information that needs to be shared and maximise the resource already inside the application," says Koo.

This means the 'video' of your rival isn't actually a raw feed but a local re-generation based on the information your rival sends to the game's server.

He also notes that as the score bar quickly updates each player's status, the small delay on the rival screen doesn't really matter.

As you can see from the graph below, the blue line indicates daily users who signed up to play the match-up mode. The red line is the average players per hour, which indicates how many people are actually logged in and playing the game on any hour of the day 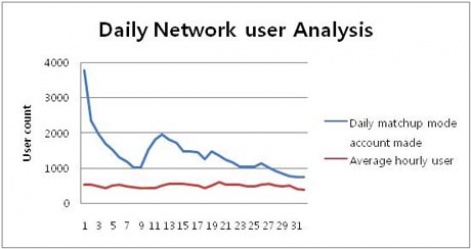 The graph begins around the time the game entered the App Store at the #5 position in the All games category.

The graph is generated by measuring how many users are logged on every 10 minutes, throughout the day. So, the time period from 0000 to 2400 is cut up by 10 minutes and shows how many users log on to play the game.

On average, 12,000 users join the network to play online daily.

And between 400 and 500 players from around the world are concurrently logged on and ready to play.

Other data shows most US users play between the hours 6pm - 10pm: the prime time for gaming is after work.

This graph proves the ability of online features to prolong the life of a game; something Com2uS' hopes to continue with the future in-app features it will introduce into Homerun Battle 3D.

There are other trends to point out too. Users tend to keep playing when they are high in the ranking or when they win more games than they lose. The game is designed in a way that consecutive losses may discourage the user from playing.

Also, customising your character with items such as better bats, gloves and helmets makes you more competitive, which also tends to discourage new players as they don't have enough gold balls to enhance their characters' gear.

"Our producers and developers are working on a way to enhance this issue. We expect to have in-app purchases in the game before October and hope this will encourage people to customise their players and continue playing," says Koo.

Users will experience changes to the game balance as Com2uS plans to put up regular updates to enhance this aspect.

Something else that's important to know is how many times individuals are playing the game. Joony Koo thinks playing more than ten times is the tipping point for people to continue playing the game more and more. 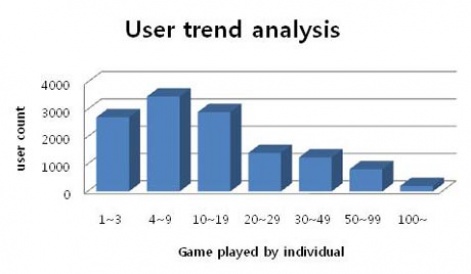 As this graph is a result of one month's tracking in the App Store, it shows how real time on-line feature adds to the amount of time users will play your game.

The online aspect of the game was crucial when it came to the decision to change the name of the game from Baseball Slugger: Home Run Race 3D to Homerun Battle 3D.

As a title, Homerun Battle 3D focuses more on online competition and a feeling of being a casual game, compared to the more hardcore sport-oriented atmosphere of Baseball Slugger.

"If you see reviews on the App Store, there are a lot of female user reviews saying that they love the game even though they are not baseball fan and don't like sports games," Koo points out.

Unsurprisingly, there are plenty of updates planned for Homerun Battle 3D. The next one reduces the heap memory the application takes up. This makes the game much lighter and enhances the network game speed.

Com2uS is also working on the rank system to let newcomers join the game more easily. Most of future updates will focus on how to keep gamers happy until in-app items are added

Aside from Homerun Battle 3D, Com2uS will be rolling out new real-time online games too.

Its second game will be Sniper Vs Sniper, which will launch in mid to end of September.

In single player mode it has 15 missions with plenty of achievements, but again the real catch is the network gaming. In this, you will be able to play with and against other snipers from around the world to clear missions.

"In a shooting game, a kill happens in a matter of milliseconds. Our biggest concern is to get the network system to work accurately and timely," says Koo.

This is why Com2uS is setting up servers in the US where more than 70 percent of App Store users are situated.

And next up, Com2uS has plans to release the world's very first mobile MMORPG to the iPhone and iPod touch.