Opinion: It's a micro-transactional tipping - or tapping - point 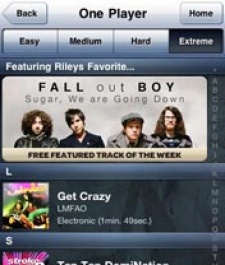 October 7th, 2009 - 08:41am
By Jon Jordan, Contributing Editor
I've been banging on about the potential impact of micro-transactions for a while now on PocketGamer.biz.

To be honest, so few games have employed the feature, it's still difficult to tell what will work.

For example, Pangea's million-selling Enigmo did 'dozens of 99c downloads daily', according to CEO Brian Greenstone.

While Freeverse's million-selling Flick Fishing has done 'tens of thousands of 99c downloads', according to its president Ian Lynch Smith.

The release of Tapulous' Tap Tap Revenge 3 and the latest free update of Pocket God should provide us with a better grasp of the situation; not least in terms of the increased adoption of the required OS 3.0.

Certainly, as a new game, perfectly designed in terms of encouraging the use of the micro-transactions so people can download their favourite music, Tap Tap Revenge 3 has the potential to be the first game on the App Store to make vast sums of money from this method.

It offers 6-song band packs at $2.99 and 2-song packs at 99c, as well as letting people buy virtual items for their avatars.

On that basis, it should be the first game on the App Store to make more money from micro-transactions than from the original game purchase.

The game costs 99c, and there will be a free ad-supported version too.

Things are more complicated in the case of Pocket God, as micro-transaction are being added to an existing game. Of course, it's sold 1.2 million copies and its teenaged fanbase really loves the experience.

However around a quarter of them haven't yet upgraded to OS 3.0, and they are also likely to be the most attitudinally reticent to spend even 99c on content they consider should be free.

Still, Bolt Creative's decision is the correct one, and it seems that releasing a new virtual item only available via micro-transaction with every free update will generate meaningful amounts of cash in the medium term.

Clearly, everyone else will be looking to see how these experiments pan out, although developers who don't have the benefit of a million-selling game franchise to hang their micro-transactional hook on should be careful how they apply such knowledge to their own situation.