Is it right that Apple's sold 2.5 times fewer smartphones than Nokia, but is worth five time as much? 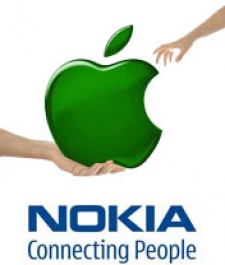 April 22nd, 2010 - 08:22pm
By Jon Jordan, Contributing Editor
Big numbers are hard to get a handle on. As you move from tens, to hundreds, thousands and above, the words become more abstract. A billion is fairly meaningless.

Not for accountants and CEO though. If money is the best way of keeping score, billions are what kick you up the global leaderboard.

In this context, it's been significant that two of the largest mobile companies - Apple and Nokia - have released their financial figures for the first three months of 2010.

The context during 2010 has been Apple's rise to become the third largest US company and fourth largest in the world in terms of market capitalisation.

It's currently worth around $235 billion, beaten only by Microsoft ($272 billion) and Exxon Mobile ($322 billion) in the US, and globally by the Industrial and Commercial Bank of China ($253 billion).

Of course, if the past 18 months have taught us anything it's that the sentiment of the markets is not necessarily to be trusted.

Like Schrodinger's cat in his box, we can assume that the market is perfect second to second. But that doesn't mean that the next next second - when we discover how subprime collateralised debt obligations have actually been securitised and open the box - that kitty is now dead, and starting to smell.

At present however, what's clear is the exuberance of the markets when it comes to Apple's prospects is hitting sentiment for Nokia.

In terms of those numbers, Apple's revenue for its Q2 was $13.5 billion, up 49 percent year-on-year. Of this, 41 percent ($5.6 billion) was due to the sale of 8.75 million iPhones and related products and services.

In comparison, during its Q1 (same calendar period), Nokia sold 21.5 million smartphones and mobile computers, out of a total of 107.8 million phones of all types shipped.

On this basis, Nokia is by far the largest phone and smartphone maker in the world. However it's also clear that while Nokia outsells Apple 2.5 to 1 when it comes to smartphones, it makes considerably less money per device.

Direct comparisons are difficult as Nokia doesn't break out smartphone revenues, but simple maths shows that while Apple makes around $640 per iPhone sold, Nokia makes just over $80 per phone it sells.

(It's estimated that Nokia gets about $250 per smartphone it sell; still a massive discount compared to Apple.)

It's this fundamental difference which means that Apple made a profit of $3 billion in 2010, while - thanks in part to losses at its infrastructure and location-based groups - Nokia only made a profit of $650 million.

One key reason for this is Nokia's longterm failure to establish itself in North America.

It's the biggest, most profitable single market in the world and accounts for 42 percent of Apple's revenues. A mere 3 percent of Nokia's phone sales come from North America.

In addition, its lack of visibility among US analysts - no doubt wielding iPhones and BlackBerries - doesn't help matters either.

Historically then, part of the reason Nokia can't charge more on average for phones is that it doesn't have access to 30 million people who could afford to pay $500 per device.

However, in recent years, the company hasn't proved it can sell such devices in many other parts of the world either. Its last success at this level was the N95; a device whose sales performance the N900 hasn't matched.

In this context, the news the first devices to use the Symbian^3 OS won't be shipping until Q3 2010 is hardly likely to improve investor sentiment, especially in a week that's seen so many headlines about the iPhone 4G.

As Nokia CEO Olli-Pekka Kallasvuo rightly commented; "We continue to face tough competition with respect to the high end of our mobile device portfolio".

Yet, moving away from a short term view, it would be as foolish to write Nokia off as much as it would be to assume the infallibility of Apple, or the immortality of Steve Jobs.

If there's one advantage to Nokia's collaborative approach to business, it's a multitude of executive internal organs.

Nokia remains the largest, and most experienced, mobile phone company in the world, and while it might only have $13 billion of cash compared to Apple's $23 billion (plus an additional $18.5 billion in other investments), that's more than enough to be useful.

It will need to change focus in terms of high end devices though; something its joint venture with Intel should aid.

Equally, unless it can establish itself properly in China, at some point, Apple's iPhone-driven growth will taper off.

Unlike Nokia, which has a phone for every price point, there are only a certain number of people in the world who can afford an iPhone. Once that group starts to saturate, Apple will have to focus on upgrade sales; a different sort of business, especially in challenging economic times.

The bottomline then is that it seems highly unlikely that Nokia will be as bad or Apple as good as they currently appear to be. Don't expect parity anytime soon, but the gap is going to close.